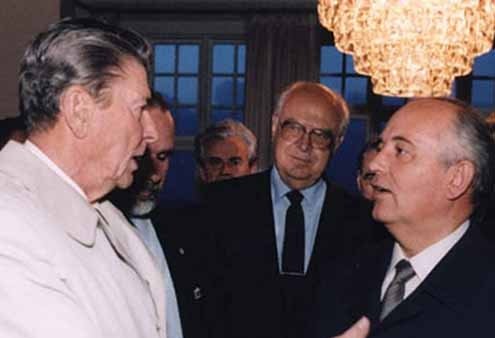 Ronald Reagan and Mikhail Gorbachev in 1984: a meaningful friendship.
M

y favorite literature professor retired soon after I graduated but not before teaching me “Beowulf,” Chaucer, and “Sir Gawain and the Green Knight,” English in the rough before the hurning vernacular acquired full legitimacy. A wiry man with a Jack-o’-lantern smile (and pipe), he told me he and his French-born wife had tired of New York City and would settle “across the pond” in rural England, where he saw life as “more patient if not more civilized, though we’ll need umbrellas.” Ronald Reagan’s ascent had made him lose heart. He didn’t like the ex-actor’s trickle down policies, or his bluster, “the faux-folksiness of it all.” Reagan’s confusing anti-Communist forays into South America seemed to him doomed to their own ineptitude, and in this he was right.

An upright, courteous and to me immovably decent man — though he’d object to the characterization, citing a love of Scotch and vintage Burgundy — I struggle to imagine him in these ritually agitated times. He’s not the only friendly ghost I can’t place in an era that takes Marx’s and Trotsky’s arcane concept of “permanent revolution” and makes it into something more palpable — call it permanent infuriation — a state of social seething and shoot-first invective that, even in comic settings, trumps logical discourse and leaves likers of compromise to cope with sensations of helplessness if not outright depression. More to the point, it seems neither in passing nor a glitch; the pitch and timbre of life has changed.

Reagan may have been a minor actor, but he’d also been governor of California and before that cut his teeth in the Hollywood guild movement. A one-time Democrat, he possessed the charm and ferocity customarily associated with politicians. After his “Evil Empire” thundering, he formed a valuable bond with Soviet leader Mikhail Gorbachev. Regan’s pro-corporate elitism (and its perceived unjustness) burnished his ideological transformation from FDR supporter into no-slackers-allowed Republicanism. Loved or loathed, he never let grossness of speech or manner into the presidential picture.

Four decades later, much of what’s stated for the record is almost casually pernicious, whether rants by sexually humiliated women seeking due redress or mainstream political leaders and presidents determined to ride exclamation point recrimination into short-term relevance. But depending on acrimony comes at the expense of constructive criticism, a huge cultural pricetag.

In national politics, the daily scandals and crises to which mass media and social media are addicted render long-term thinking unimaginable — unless you consider a potential 2020 tussle between Archie Bunker and Oprah Winfrey an act of imagination (or entertainment).

Trump was early into his Manhattan real estate adventures and Oprah an aspiring actress when my professor retired. Submitting the idea that such figures could become national political leaders would have pushed the Reagan equation into surrealism. Politics still possessed a realm marked off in the way early lords and barons staked their claim to land. Above lords were kings and past them, popes. Later came presidents. Abrasive tycoons, the offshoot of industrialism, populated a separate domain that they roamed mostly unimpeded, away from politicians, never the twain to meet. But they have met and mated.

It rained buckets in my professor’s adopted English town. “We have 17 umbrellas, and that was just the last count. There may also be one for you.”

Sadly, I never fetched it. I never got to his gloomy but civilized hamlet. Instead, in 1993, I got a letter from France, from his wife, informing of his death. He hadn’t lived to see the rise of contentious reality television or the locomotive belligerence of the Internet and parts of social media, each one a signpost in a newly altered social and cultural landscape. “He liked you so much,” she wrote to me. As I did him, a nimble-minded and never vulgar man of the kind that is growing increasingly difficult to find, even among alleged adults. The final line in his last handwritten letter concluded with the words, “…before it’s too late.” Now, in more ways than one, it is.