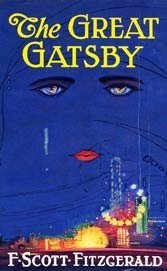 This young man Fitzgerald writes promising sentences. He gives melody to disaffection and amorality. T.S. Eliot must have mused this after reading F. Scott’s “Wasteland”-themed novel about two no-good men and one impressionable woman, observed by a loyal and moral narrator. Eliot said the novel “excited” him, a rare stirring from the fastidious poet. The excitement was justified. The prose compression (even when lavish) and absence of frivolity (even when judgmental) make for an indelible fullness. “I was within and without, simultaneously enchanted and repelled by the exhaustible variety of life,” says the reasonable Nick Carraway.

Verge-of-30 Nick, a hardworking Midwesterner (“… too old to lie to myself and call it honor…”), moves to faux-chic Long Island where he meets aloof shyster Jay Gatsby (née James Gatz) who’s not-so-secretly besotted with spoiled rich girl Daisy, who’s in turn married to bigoted but providing hunk Tom (who’s naturally having an affair with the local mechanic’s lush wife). A bad moon rises. This is old hat by postmodern standards, but 1925 barely qualified as post-war — with a bigger and more brutal one in the works. Fitzgerald’s supreme talent is people; he frames the venal Roaring Twenties by drawing characters just weighty enough to bruise.

The harm done by deceit, callowness and infidelity are revealed gradually, with twilight nagging at some, then all of the setting. Once Fitzgerald rings cruelty’s number, his “careless people” scarecrows fully in harm’s way, blood finds its drain and circles. Soon… all that’s pretty is foul: “What a grotesque thing a rose is.”

The novel has spawned countless cultural trinkets in film and language, but all that really matters is the slim book itself. Fitzgerald wanted it to, and his wish is this story’s command. Hard to imagine Holden Caulfield, differently careless but from the same womb, without East and West Egg’s “Westerners” first.