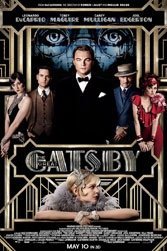 Director Baz Luhrmann has the aeronautical mind of a literature student. He gave Shakespeare’s “Romeo & Juliet” a contemporary splash of color in 1996 (calling it “Romeo + Juliet”), and now he’s up to his old tricks with F. Scott Fitzgerald’s famed novel.

It’s the summer of 1922. The Roaring Twenties roared, business boomed, the bourgeoisie got gaudier, and midwestern war veteran, Nick Carraway (Tobey Maguire) had a front row seat to the sounds of all the klaxons. After moving into a Long Island house next door to mystery millionaire J. Gatsby (Leonardo Di Caprio), he’s lured into his hedonistic lifestyle.

“I was within and without,” Carraway says, as he becomes an intimate third wheel to Gatsby’s romantic pursuit for unhappily married Daisy Buchanan (Carey Mulligan). Luhrmann dangles reel after reel of soul-searing beauty as this adult fairytale holds the cascading pace of a lacy striptease.

It’s no mystery that this is style over substance. The story’s lit up with the spectral torch of an imaginative director. The art design is eye-copping, the costumes glittering, and most of the cast falls under Luhrmann’s spell. He’s the puppeteer choreographing this parade of art-deco magic, and the likes of Leo bring the characters to life.

But Maguire, rightly earmarked as “Spider Man,” is just a puppet, with all strings attached. Maybe he met the blandness required to keep focus on the visuals, but his brittle face would feel more at home in a “Team America” sequel. He lets down the star-studded cast, a shame considering he frames the whole film.

Nevertheless, the show does go on. There’s chatter about Luhrmann taking liberties with Fitzgerald’s book, but it’s important to remember that film and literature are different arts. Cinema must give what a novel can’t — it must realize what’s otherwise imagined. This doesn’t vulgarize a classic, it supplements it, and literary purists should take “Gatsby” for what it is: a remarkable aesthetic achievement.