The Great Game: On Secret Service in High Asia 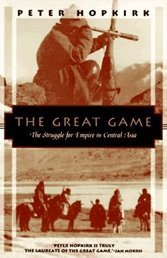 Exhibit A in the series “There is nothing new under the sun.” If the characters in this book were not so interesting and the intrigue worthy of a Le Carré, this book could really get you down; they’ve been fighting in and around Afghanistan and Pakistan for a long, long time. If you think The First Afghan War means the Soviet invasion in 1979, think again. It was a dismal British failure between 1839 and 1842. In fact, the Soviet invasion was nothing less than the last move in “The Great Game.”

The Game took off from fears of a Napoleonic invasion of British India followed for fears of a Tsarist. Russia and Britain sparred for over a century for command of northern access to the appetizing Indian sub-continent. As in the Cold War, two powers pussy-footed around open conflict, waging subliminal skirmishes in the form of trade missions and mapping expeditions (no one even knew what was really there).

Both Russia and Britain played the crumbling Ottoman Empire off the Persians and local tribes and khanates against each other. The readable Hopkirk is the authority on this area and this period. His admiration for the eccentrics, renegades and heroes on both sides never slides into the mawkish or polemic. The occasional glimpse the reader gets of Hopkirk as a wide-eyed schoolboy bewitched by it all is endearing.

If you ever wondered what a “pundit” really is, they were Indian natives trained in cartography and reconnaissance. Top secret, the British trained them as undercover — and deniable — agents. They remind us that heroism and fame are not always partners.