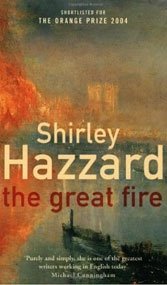 Admirers of Shirley Hazzard waited 20 years for her novel, “The Great Fire.” Set in 1947, it tells of Aldred Leith, a war-scarred soldier from Britain’s privileged class. At 32 he’s left behind a lover and a failed marriage, and is on a two-year journey through Asia to document a world devastated by war and on the verge of transformation. Able-bodied but twice-wounded, Leith’s expectations of life have changed. But then he meets Helen, a slight, brilliant girl, 17 years his junior. She and her brother Benedict are Australians set adrift by indifferent, hectoring parents. They shield themselves in poetry, great books and the familiar comfort of each other.

The book’s title refers to the conflagration that was World War II, but this is a story neither of wartime tragedy, nor of postwar optimism. Rather, Hazzard explores the slim space in between. The war is over, yet the world cannot settle on peace: China is on the brink of revolution, while the Cold War is waged across devastated Europe. Survivors contemplate the ruins — of institutions, marriages, friendships, possibilities — and what will be required to reclaim what is left. Hazzard writes of a time when, in the wake of so much death, “the necessity to assemble life became urgent and oppressive.”

Leith is a man of civility, reserve, and moral discernment. Helen, at least as Leith imagines her, is a changeling — neither girl nor woman. The lovers are separated by age, by her disapproving parents, and by geography.

This is an old-fashioned, unabashedly romantic story that could have given way to preciousness but for the Hazzard’s transcendent prose. Her meticulous descriptions serve both the particular and the abstract: Hong Kong’s “pastel villas on the mountainside, here and there among the vegetation: looted, unroofed, their marzipan interiors lined with rot, some of them rebuilding under bamboo scaffolding.”

In “Greene on Capri,” her 2001 memoir about British writer Graham Greene, Hazzard remarked on the passing of the time when language mattered. For her it still does. But this perfection exacts a price. The sharp dazzle of her prose often distances the reader, and her dialogue is sometimes mannered. One is not swept up in this story. Instead, it becomes a meditation, as though Hazzard quietly offers for our consideration a moment when the world was set ablaze. And perhaps that is what she intends. Who can resist the urge to run out into the cold to contemplate a great fire — its devastation, what remains, what it sets in motion — and simply to watch it burn?

About the Author: Paula Bruening