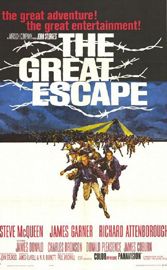 Not war and not realism, this is nonetheless unrivaled ensemble entertainment. Dozens of Allied prisoners in a German prison camp plot their escape. Both the Germans and the Allied internees behave with old-school dignity; one side rigidly checking, the other elegantly concealing. John Sturges’ grand cast (James Garner, Steve McQueen, Richard Attenborough, Charles Bronson, Donald Pleasance, James Coburn, David McCallum) is not only stellar but also chemically balanced. Pleasance is wonderful as the forger, Bronson is sullenly cheerful as a tunnel-digger, and Attenborough inspires as “Big X,” the leader of the pack. Novelist James Clavell (later, “King Rat,” “Shogun” and “Noble House”) keeps the script pithy and stylishly, fleshing out each of the characters. The escape occurs and, all things considered, goes quite badly.

But the post-escape story lines only strengthen the established personalities and launch the film to classic heights. McQueen as “Cooler King” Captain Hilts made his legend twice over, first as a smart-assed prisoner, then as a bat-out-of-hell motorcycle thief trying to accelerate his way into neutral Switzerland. He doesn’t make it, but who’ll ever forget the try? Elmer Bernstein’s River Kwai-styled theme became an instant standard and is still recognizable today.