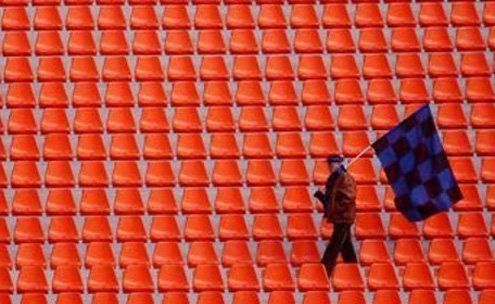 One aspect of revenue Italy clubs can't count on is stadium ticket sales, where the figures are alarmingly low.
I

n mid-October UEFA released its 2015 Club Licensing Benchmarking Report, the annual state-of-the-union fact-book documenting the financial health of club football across its 54 member associations. The 117-page document is crammed with snazzy charts and heat maps that are indicative both of UEFA’s commitment to selling sustainable football, and in turn, how data-hungry their target audience — journalists and the typical fan — has become.

For the most part, the graphics tell a positive and cohesive story: club revenues continuing to grow at more than six percent each year and clubs’ bottom line losses are a third of what they were in 2011, before UEFA’s very own Financial Fair Play regulations took effect. The regulations were implemented to curb the boom-bust nature of investment and success at a time when more and more clubs were finding themselves insolvent. UEFA’s figures show that since 2011, the number of clubs with operating losses of more than €30 million have decreased from 24 to 10.

While the report is more self-congratulatory than self-critical, UEFA does point out one disconcerting trend: “the rapid growing and wider gap between top and other clubs will represent the most important challenge for club competitions in the future.”

Real Madrid had the highest revenue of all clubs last year with €550 million, while only nine other clubs across the continent generated half that much. After Arsenal, which at eighth on the list generated €360 million, the competition falls off a cliff. Juventus, the Italian champion and the country’s top revenue-yielding side, brought in only €279 million by comparison. They punched well above their weight in reaching the 2015 Champions League final.

Has Financial Fair Play been directly responsible for creating this two-tiered system? In part, yes. While FFP has deterred new owners and investors from unfettered spending, it didn’t come in time to stop the billionaire owners of Manchester City and Paris Saint Germain from massive investment and global brand-building. It’s impossible to imagine a similarly aggressive level of investment given current constraints.

That said, one could also argue that FFP has merely rewarded those clubs that were already pursuing sustainable streams of revenue. Manchester United’s courtship of global sponsors and fans long predates financial regulations. The cash cow that is Premier League television rights was already in rapid expansion more than a decade ago.

As UEFA points out, the concentration of sponsorship and commercial revenues in the hands of very few clubs is what’s skewed the playing field. There are a finite number of trophies on offer in European football, and several clubs — through a combination of heavy investment, good strategic choices, and also good timing — have benefited disproportionately from the game’s globalization. Financial Fair Play has now helped solidify the landscape.

One of the key differences between mega-clubs and the rest is in the mega-clubs’ low ratio of player wages to revenues. Despite paying their players considerably higher wages in absolute terms, none of the top eight revenue-generating clubs spent more than 60 percetn of their revenue in wages.

Further down the list looks very different, and those interested in the plight of Italian clubs should look first at the wage-revenue ratio. The ratio for Serie A clubs was highest among the major leagues at 71 percent, followed by England (58 percent), Spain (56), and Germany (50). AS Roma spent a whopping 85 percent of its revenue on player wages.

Italian clubs overpay their players largely because they’re unable to monetize their product, with the stadium attendance crisis standing out. Serie A’s gate receipts were half that of La Liga and less than a third of the Premier League. The disparity between gate receipt per capita is even more striking. The Italian league generated €22 per spectator, compared to €49 in England, €38 in Spain, and €36 in Germany.

After a recent tour of games in Italy, I can speak to the lack of cold beverages in Modena and the prison-style lavatories in Bergamo. Twenty euro may seem like a bargain, but for those who aren’t avid fans, the price a curva ticket just doesn’t represent value for money — never mind more expensive sections of the ground.

Returning to the overall picture, one simple — if crude — way to bridge the gap between the mega-clubs and the chasing (fading) pack would be to reduce the number of automatic Champions League berths from smaller member associations. UEFA’s showcase tournament is a fantastic spectacle beginning with the knockout stages, when mega-clubs with genuine trophy aspirations start butting heads. But the existing 32-team pan-European tournament simply doesn’t match today’s financial realities.

Smaller associations don’t have enough clubs with sufficient revenue to make them competitive. That the same few clubs make repeated trips to the round of 32 but no further is counter-productive, benefiting neither the tournament nor domestic competitions, where Champions League revenues helps entrench those few clubs over the rest.

Instead, adding one or two teams from each of the major leagues might make the field more competitive. It might also give middle-tier clubs a better chance of rising toward the level of the mega-clubs by competing on a regular basis, earning valuable revenue and exposure. The key is tapping the major associations, because as the money pie stands now the smaller ones are lost.