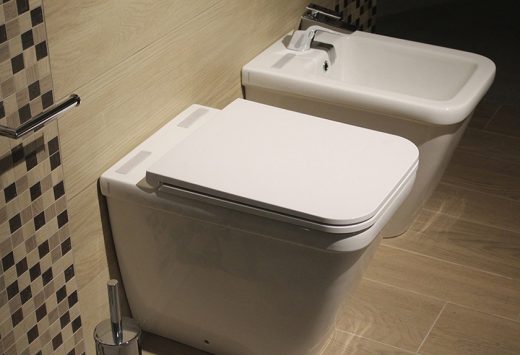 In all its ceramic glory, but to what end?
W

hat’s it for? Americans can live here for decades thinking Italians go to the trouble of installing bidets just so they can soak their feet. If they’ve read Henry Miller, they add so women can wash before and after sex. The truth is that every Italian of whatever gender uses the bidet daily — you’re not clean after defecation if you haven’t cleansed away every trace of feces. Except in case of dire necessity they won’t move their bowels anywhere but home, next to their own bidet. I remember on a visit to Italy in the early seventies somehow innocently revealing to an Italian my assumption that he pulled up his pants after only using toilet paper. A major gaffe.

Americans say “shit” in frustration and “hot shit” in admiration but have barely a nodding acquaintance with the real thing, with the unfortunate corollary that many of them walk around emanating a faint fecal odor. Italians’ acquaintance with their stool is hands on. When they grasp each other’s habits of anal hygiene, each side cordially considers the other filthy (“Americans just use toilet paper?” “Italians wash WHAT with their fingers?”). Fastidiousness lying in the eye of the washer, an Italian is disgusted by the idea of having bits of feces clinging to her, but finds it normal to wash daily there and only there; an American is disgusted by the idea of getting up-close-and-personal with his anus but can’t imagine a day without a shower.

Italians don’t get their bidet habit from France, where the fixture is indeed ladies-only, but from their neighbors to the south: Arabs, like Asians, wash every time they move their bowels, and bequeathed this healthy custom to the Italians. “Doing the bidet” for your baby or your aged mother is a far more intimate gesture of tenderness than Jesus washing his disciples’ feet.

The truth is that every Italian of whatever gender uses the bidet daily — you’re not clean after defecation if you haven’t cleansed away every trace of feces.

Another time I was enjoying a sauna along with several Roman women, when an American came in and sat down naked on the bench. The Italians glared. Seeing that she didn’t take the hint one spoke up and sent her out to find a towel to put under her butt, giving them the chance in her absence to rail against filthy foreigners who thoughtlessly contaminate public spaces. Not only won’t Italians sit directly on the wood in a sauna, but they will endure painful thigh cramps to avoid putting bare skin on public toilets, which in the name of hygiene are often stripped to seatless porcelain. An Italian patient who works as a tour guide told me, Foreigners are horrified that we don’t have toilet seats in public restrooms, we’re horrified that they would consider sitting down on one.”

A medical corollary: Italians find the rectal route a perfectly fine way for getting drugs into the system. I once co-authored a scientific paper with Professor Prantera’s ulcerative colitis research group showing that an innovative enema twice a week worked as well for warding off relapses as the standard six horse pills a day, and gave fewer side effects. The paper got turned down by an American medical journal with the puzzled comment, “Who on earth would choose an enema when they can take a pill?”

Italians are finicky about other body parts as well. They shudder when the French carry unwrapped baguettes under their arms, they ask fellow-passengers to remove their feet from the facing train seat, and they slip their shoes back on to cover the two steps from my dressing room to my exam table.

My take is this: Americans consider our whole underside to be intrinsically dirty and mentally airbrush it out. Italians think bodies are amenable to cleansing, so they’re constantly aware of its potential contamination. Goes back to when the Romans, with their mania for washing, lost out to Christians, who for centuries considered bathing a sinful cult of the body.