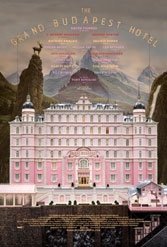 Wes Anderson is among America’s most inspired fantasists. When he’s on his game — “The Royal Tenenbaums,” “Moonrise Kingdom” — he casts an idiosyncratic spell on all around him and delivers fairy tales secured by eccentric characters behaving in a genuinely eccentric way. What Wes Anderson is not is European, which makes this consciously oddball account of a make-believe spa hotel located in a make-believe interwar alpine nation something of a misfire. It wants to put old school and new flavors on the same table and succeeds in neither.

A writer (Jude Law) recalling a book he set in the faded Grand Budapest Hotel of 1968 steps back in time to its early 1930s heyday lorded over by a preening concierge — Ralph Fiennes, delightfully David Niven-like as Gustave H. — and overflowing with an array of bizarre guests. This is Anderson channeling Austrian writer Stefan Zweig, whose beautiful and sometimes comic melancholy illustrated that period’s ferocious decay.

But Anderson, though enchanted by Zweig, remains very much a 21st-century American. His response the yesteryear of his imagination is irony. His “old Europe” exists in the service of a screwball crime caper that tries merging the hardboiled jargon of the American gangland 1920s to the quirky foibles of the collapsing European aristocracy. The fictitious world of snowy Zubrowka includes a bureau of labor and servitude (a nod to the rising Fascist tide) and a Prussian noblewoman with an indecipherable will.

When she dies, gaily mercurial loverboy Gustave H, with deadpan lobby boy Zero Moustafa (Tony Revolori) in tow, is plunged knee deep into a wild and wacky Baroque power struggle. When he’s not when not anointing himself with “l’Eau de Panache” he’s hamming it up with cops and assassins while dishing out fey dirges. “This barbaric slaughterhouse that was once humanity,” he rues, but cuts all that short with, “Oh, fuck it!” It’s the 1930s as seen through a sarcastic postmodernist prism. Young Zero, meanwhile, talks like someone’s iPad-toting 10-year-old.

Yes, there’s a story underlying all these screws and balls — a detective mystery involving a stolen painting — but the reality is that Anderson’s amalgam of periods doesn’t work. Its comic bromides are insufficiently focused enough on any one sensibility to mock anything successfully. “Write what you know,” writers are often told. Anderson doesn’t, and the result is sweet but silly trifle.