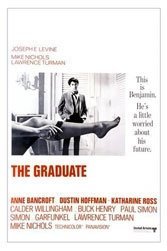 Decades before auteur Wes Anderson made dry humor and disillusionment a cinematic aesthetic, there was director Mike Nichol’s “The Graduate.” But the 1967 comedy-drama is more than style. It’s a valentine to the afflictions of youth.

One doesn’t need a college degree to understand its characters’ maladies, although it helps to be intimate with the post-college blues. Young Dustin Hoffman is immaculately cast as stoic Benjamin, a recent college graduate numb to adulthood’s pinch. Benjamin maintains a wooden expression even throughout the seductive gaming of his parents’ friend, middle-aged minx Mrs. Robinson (Anne Bancroft). A feline flirt with infamous gams, Mrs. Robinson is quick to ensnare the suddenly nervous Benjamin at a hotel. Funny how the unwitting hotel receptionist seems more clued-in than Benjamin to his illicit meeting (“Are you here for an affair, sir?”). The ensuing weeks of sex prove jejune, mechanical, but Benjamin doesn’t break from it except to drift in his parents’ pool.

That is until he falls for Mrs. Robinson’s daughter Elaine (Katharine Ross). It’s the first sign of life in Benjamin: instead of giving in to what’s easy, his love for Elaine makes him desirous and risk-taking. Too bad spiteful Mrs. Robinson feeds Elaine all the sordid details of the affair. Disgusted, Elaine bolts back to the safe haven of college. A dejected Benjamin is forced to muster the idealism he’d lost, departing on a harebrained odyssey to make Elaine his wife. It’s more honorable than absurd, because Benjamin now knows that in pursuing this impossible relationship he has nothing to lose and everything to gain.

Simon and Garfunkel’s funereal pop soundtrack couldn’t be a more perfect companion piece. “Mrs. Robinson,” the standalone upbeat song, was about Eleanor Roosevelt before director Nichols forced Paul Simon to make it about the film’s temptress.

Bored housewife Mrs. Robinson proves a stronger symbol of American dogma and defeat. When she tells Elaine at the film’s end that it’s, “Too late,” it’s the young, still hopeful Elaine who spiritedly barks back, “Not for me.”