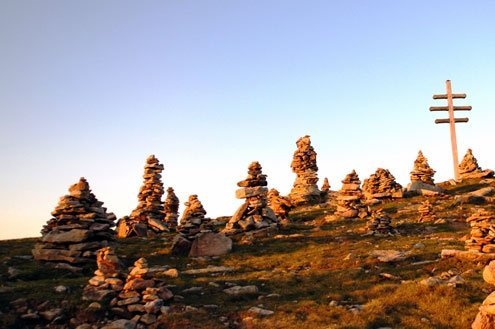 he Good Witch Martha stands waiting, her frame small and sinewy against the imposing Prösels Castle. I walk toward her, hands twitching nervously. Double, double toil and trouble; Fire burn, and caldron bubble. Thoughts of pointy hats and evil curses pester me. Martha shuffles forward and shakes my hand, her frail fingers delicate in my sweaty palm. She smiles with her eyes first and then her mouth relaxes into an inviting grin. I relax. Maybe she won’t pull out a broomstick anytime soon.

Martha is a tour guide in South Tyrol and is as legendary as the Dolomites in these parts (now a UNESCO World Heritage Site). Many witches were killed in Tyrol in the 16th century and Martha has spent her life studying the legends.

We step inside Prösels Castle. A medieval marvel, it is enshrouded by the intimidating Schlern mountain (2,564 meters). The castle was built around 1500 by Leonhard of Völs who was later involved in the first witch trials in the area.

Martha tells me that during the early 1500s the newborn mortality rate was high and locals accused Leonhard of being responsible for the deaths. To appease his situation Leonhard charged nine women with witchcraft and found them guilty of the murders. Under duress each woman confessed to stealing the babies and riding on their brooms to Schlern where they claimed to feast on the babies with the devil. Today tales of sorcery and witchcraft still circulate in South Tyrol but most have their origins in this one. I decide to leave the castle and head for the capital Bolzano before it gets dark (just in case).

Bolzano is far removed from the mystical world in the hills. It’s a pretty town with chic shopping and a spatter of rustic restaurants offering fusion Italian and German cuisine. Locals peddle fruit and roasted nuts on the street and the low hum of conversation creates a warm atmosphere.

A good base for exploring the surrounding hills, the South Tyrol Museum of Archaeology is also worth a look when in town. Here lies the body of Otzi the Iceman, a preserved mummy from the Copper Age. His body was discovered in 1991 by two German hikers in the Schnalstal glacier in the Ötztal Alps. Initially they thought Otzi was a modern corpse and his body was removed carelessly by Austrian authorities using non-archaeological methods (his hip was punctured in the process).

The body was examined and the team discovered Otzi was in fact 5,000 years old, making made him the world’s oldest ice mummy. Today Otzi is a much-loved figure in Bolzano but typical of superstitious Tyroleans many believe his body to be cursed. Maybe it’s him I have to thank for that airport parking ticket! If you arrive in South Tyrol outside ski-season then hiking should be another essential part of your itinerary. I set off on a small trail to the Stoanernen Mandln, or Stone Men, located on a summit above the Sarntal Valley at 2,000 meters. This is a popular hike and suitable for any fitness level. Up here piles of sandstone slabs sit together, their origin and purpose shrouded in mystery. Some believe it was a place were occult Celts congregated. Others claim it was a witches’ gathering place during the 1540 trial of a woman accused of sorcery. One thing is certain, the views are astounding.

The best part of the walk still awaits you however. On your descent you will come across the Auener Hof restaurant, literally the “highest” Michelin star restaurant in Italy, sitting at 1,662 meters. While enjoying a visual feast of the remarkable Dolomites we dined on chestnut ravioli with black truffle (€14), sirloin steak with artichoke and eggplant (€23) and nougat parfait with almond brittle (€12). That’s what I love about Italy, you come for the culture, history and natural beauty but you always leave talking about the food.

Note on ski Season More than 1,000 kilometers of downhill runs await skiers and snowboarders in South Tyrol. The region boasts over 30 skiing areas with most belonging to two large networks, the Ortler Skiarena and the Dolomiti SuperSki. Ortler Skiarena is more family friendly especially when it comes to price. The Dolomiti SuperSki network is the world’s largest area of inter-connected resorts and is for the more advanced among us. Other winter activities include sledging, horse-drawn carriages, ice-climbing and snow parks.

About the Author: Susan O'Driscoll