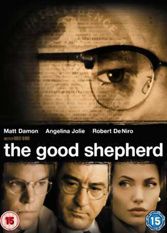 Despite its spooky trimmings, this is a just a “sins of the father” story wrapped in CIA tinsel. Edward Wilson (Matt Damon) is a 1930s Skull and Bones Society Yalie who picks up intelligence work partly in response to his treasonous father’s suicide. He graduates to scowling pro in the Office of Strategic Services — recruited by a fictional version of OSS founder Col. “Wild” Bill Donovan (Robert De Niro as General Bill Sullivan) — and thrives in the Soviet-obsessed postwar CIA.

De Niro builds his movie around flashbacks that begin with the 1961 Bay of Pigs fiasco and alternate between Yale, London, Berlin, and Cold War Washington. Wilson is a laconic spook guilty of neglecting a son conceived with Clover Russell (Angelina Jolie) in a loveless marriage (Jolie’s skills are virtually ignored). Though Damon is a model of WASPY restraint and sublimated bitterness, his dourness eventually torpedoes the movie.

Even the dialogue is stilted: “Get out while you can,” “He knew too much,” “It’s a dirty business,” and so on. Spy stories that reject intermittent humor and wit are canned goods. By imaging a time when no one laughed, De Niro and screenwriter Eric Roth (“The Insider,” “Munich,” “Ali”) produce a stillborn project that takes some good actors (Alec Baldwin, William Hurt, John Turturro) on a patriotic trip to nowhere.