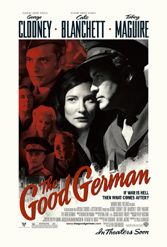 In the “Casablanca”-style ending to Steven Soderbergh’s latest excursion, George Clooney stands on a rainy Berlin tarmac in as a Dietrich-styled Cate Blanchett strides to a waiting DC-3. Despite the downpour, Clooney’s uniform is as dry as Egypt.

It’s hard to tell conceit from moviemaking in this 1940s tribute thriller that celebrates black-and-white but not much more. Clooney is Jake Geismer, a former Berlin AP bureau chief dispatched to the bombed-out capital to cover the Potsdam conference as a war correspondent. When he finds German ex-mistress Lena Brandt (Blanchett) pimped by American military driver Patrick Tully (Toby McGuire) and the driver is later murdered, Jake is on the case (involving expedient Americans, semi-bad Soviets, and not-so-“good” Germans). Soderbergh’s newsreel lacquer — with documentary footage superimposed — gives Berlin a waxy, ghost town feel. But this isn’t “Schindler’s List.” The script, from a novel by Joseph Kanon, is a glorified comic book. Jake to Lena: “You did nothing wrong.” Lena: “I survived.”

But it’s the corrupt Tully who gets to speak 21st-century jargon in 1945: “Who’s your Comrade?” Clooney is earnest but wooden, Blanchett unflinchingly languorous, and McGuire miscast. Thomas Newman’s gets the noir score just right, but Soderbergh has fallen mightily since “The Limey,” “Out of Sight,” and “Traffic.”