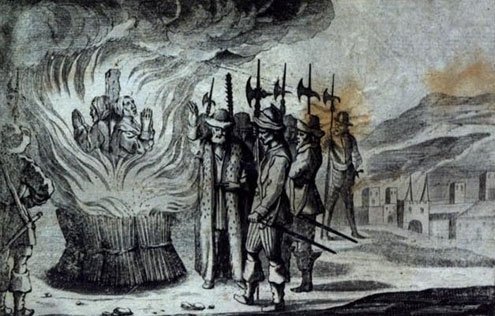 In 1655, the Duke of Savoy massacred thousands of Waldensians in the Piedmont. They had refused to convert to Catholicism.
I

n the summer 2012, while Alberto toiled in Milan, I finished up some repairs at our vacation home on Lago Maggorie. Walking home one morning after a cup of java at our local bar I crossed paths with two immaculately groomed young men in white shirts. My years in Central America honed a sixth sense for missionaries. As I suspected, the young men — Jehovah’s Witnesses — offered me not only the wonderful opportunity to discover “The Living Jesus” but also a chance to receive a free copy of The Watchtower magazine.

I thanked them and declined. I was an atheist and, by the way, a homosexual. One of the Jesus salesman reeled, as if I had just announced I had Ebola, while the other replied, “Jesus also loves sinners.”

“Good to know,” I said and chuckled. “So tell me then, why has your church been so nasty with us then?”

He immediately quoted some obscure scripture from the back of his magazine.

“Nice try.” I waved and walked away.

“I’m here to bless your apartment,” he said, a Bible clutched in one hand and a kind of magic wand filled with holy water poised in the other.

“Oh, thank you,” I replied, “But we are an atheist homosexual couple.”

“Yes, but everyone needs God’s blessing.”

“God’s not the one I have a problem with.”

“Well, until the boys in Vatican City start to behave that way, I’ll have to pass on the blessing.”

He left quietly and hasn’t come back since.

But if you think this is a religion-bashing column you’re wrong.

Though I’ve never interacted with them personally, Piedmont has a small but strong population of Waldensians (Valdesi), a Christian movement that arose in southern France an expanded into north Italy, with small communities also established in southern Italy, Argentina, Germany, the United States and Uruguay. Late 13th-century merchant Peter Waldo organized the movement, originally known as the “Poor Men of Lyons” and run by laymen. Waldo preached that poverty was the way to spiritual purity (the famous line, “No man can serve two masters, God and mammon,” is attributed to him). Feeling threatened, the monolithic and intolerant Roman Catholic Church swiftly declared all Waldensians are heretics. Thousands were killed, many burned in public. Later, the group supported the Protestant Reformation with most of its members joining local Protestant denominations.

But Italy wanted no part of them. Waldensians were segregated and barred from Italian schools and hospitals until the late 19th-century. During the Nazi occupation of north Italy, the Italian Valdesi — all too familiar with religious persecution — hid Jews facing immediate deportation in the same mountain valleys where their own ancestors had found refuge from Catholic discrimination centuries earlier.

The Waldensian faith is committed to “serving the marginalized, promoting social justice, fostering inter-religious work, and advocating respect for religious diversity and freedom of conscience.”

To avoid the danger of Biblical fundamentalism, Waldensians insist the Bible be interpreted based on culture and personal dignity. On homosexuality, they say: “The words and practice of Jesus, as seen in the Gospel, call us to welcome each experience and each choice marked by God’s love.”

Although not without controversy, they agreed in 2007 to authorize the blessing of same-sex couples in church under certain conditions. “For us as Protestants [marriage] is not a sacrament, but a civil matter.” As a sign of solidarity with gay people, some members attending the Methodist and Waldensian synod held in Turin in August 2014 wore pink triangles, the Nazi symbol used in concentration camps to denote homosexuals.

In 1985, Italy updated its relationship with the Vatican. Catholicism was no longer legally seen as the religion of Italy. Still, each Italian taxpayer must designate 0.8 percent of their annual income tax (a sum known as the otto per mille) to either to government welfare or one of 12 recognized religions. Before 1985, Italy actually paid all Catholic priests a small monthly stipend.

Italian taxes now nudge up against 50 percent, so I have no sympathy for the financially inept Italian state. The Catholic Church, on the other hand, already receives considerable revenues through exemptions and benefits — not to mention what they get through the otto per mille tax.

Though the Valdesi have only about 25,000 registered members in Italy, more than 400,000 Italians opt to support their community and its charitable works. We’re among them. We give our otto per mille to a church whose followers have shown a much broader view of Jesus’ love, no free magazine required.