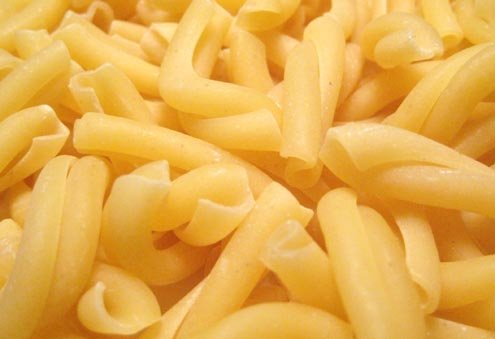 Priest-stranglers, Strozzapreti are all about rounding and hollowing.
W

hen the Home Food cooking association I’ve worked for in the past called me recently, I assumed they wanted me to make a meal for visitors to Rome, something I’ve done before. But this time was different: the idea was to teach a chef and her assistant, Americans who run two restaurants in Portland, Oregon, how to make gnocchi and malloreddus (a Sardinian gnocchi variation).

The duo had booked classes throughout Italy to learn as many gnocchi-making methods as possible. Two things struck me. First, the chef, a woman, was intimately and impressively familiar with Italian cooking. Second, for the first time in my life, I was actually teaching a pro.

But the emphasis on gnocchi was interesting. Making pasta is clearly a favorite subject, but focusing on gnocchi wasn’t something I’d heard much about before. But when she pulled out Oretta Zanini De Vita’s illustrated “Encyclopedia of Pasta,” I slowly began to get the gist of her larger project: she wanted to write a book about gnocchi and how to make it.

Opening the book, she asked me to clarify a Neapolitan gnocchi known as strangulaprievete. I’d honestly never heard of it, but the Neapolitan dialect tipped me off that they were a kind of strozzapreti, or hand-made pasta.

After the lesson, which went well, I started doing my own research into gnocchi. Suddenly I understood the source of the chef’s confusion, and she can’t be alone. Various kinds of strozzapreti and gnocchi seem to overlap. They’re often described similarly and can be hard to distinguish one from the other, even for Italians.

Underlying the confusion are the names and nicknames that different dialects often assigned to the same pasta. Hoping to stay on the right side of Italian chefs, I’m going to play Julia Child and try to put strozzapreti and gnocchi in their right places.

Gnocchi are small pieces of dough made from wheat flour and potatoes (with or without eggs). They’re usually round, boiled in water or broth, and served with a variety of sauces. The confusion begins because certain kinds of gnocchi, while still called gnocchi, don’t include potatoes. Instead, they’re made from flour and one of a number of other possible ingredients: rice flour, semolina, dry bread, tubers, and even vegetables. For example, gnocchi alla romana are made with semolina, not potatoes.

Strozzapreti, in turn, are homemade pasta that require a fair amount of manual labor, which we’ll get to in a minute. Once confined to the South, strozzapreti are now made throughout the country. The variety is ample enough to defy a single classification, with each region contributing its own format, ingredients, and name. In Naples and Campania, they’re known as strangulaprièvete or strangulamuonece; it’s strangozzi in Umbria; strangolapreti in Abruzzo; strangulaprevati in Puglia; strangugiapreviti in Calabria; stratto in Viterbo, and the list goes on. In some cases, a difference of 10 kilometers can mean a name change.

What makes all these pastas alike is the significance of the name, which basically means “priest-strangler,” and the shape. You get strozzapreti by rolling and hollowing out a strip of dough on a cutting board. The two aspects of making the pasta, the rounding and the hollowing, gives rise to the word strozzapreti, which comes from the Greek strongulóo-prepto, rolling and hollowing out.

So no, the pasta wasn’t named for a medieval serial killer who terrorized the Catholic Church and ate priests for dinner. No one ever died for strozzapreti, though, if well-made, they can be to die for.

Despite the gnocchi-strozzapreti confusion, what is true is that both emerge from the same ingredients and are served with the same sauces.

Bottom line, both gnocchi and strozzapreti are a kind gnocchi, which is the generic term for simple, handmade pasta. But if the gnocchi have a slightly harder feel and are hand-worked (back to the rolled and hollow), they’re strozzapreti.

— Heap the flour; add hot water with dissolved saffron and salt. Knead until the mix is smooth and homogeneous.

— Let the dough rest for about an hour. Then take a bit of dough, and form a roll with the diameter of about a centimeter.

— Cut into squares always about a centimeter wide.

— Put each square of the pasta on a fork, thumb pressed down, which this video helps illustrate.

— Fry the garlic with olive oil and pepper, add the porcini mushrooms with the filtered water, add salt, and let the water drain. Add tomatoes and bring to a boil.

— Boil the malloreddus (gnocchi) on the side and add sauce, sprinkling it with finely chopped parsley. Serve immediately.