The globalization of Alexandra 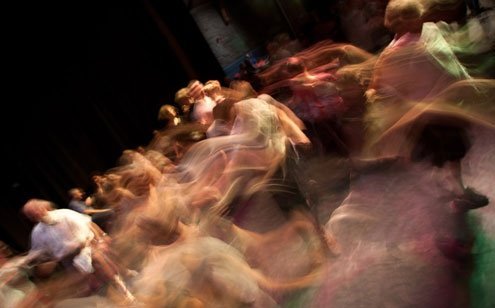 Dancing the ceilidh in Scotland.
A

s each year in Italy passes, my American friends dwindle. Where once there were enough of us to settle around a Thanksgiving table, it’s now rare that I have the opportunity to wax poetic on the joys of maple syrup or reminisce about the cold and dark waters of the Atlantic seashore.

This, I suppose, is just a part of living abroad. For some, it’s a period of transience, something temporary, a time of life many will later mention fondly, maybe at a work party or PTA meeting if the subject arises: “I used to live in Italy.”

That your friend group would grow smaller over time makes sense when you live more than 4,000 miles and 10 hours from home.

I remember my mother once mentioning she’d had a reunion with her former college roommate. “I hadn’t seen Nila in 30 years until today,” she told me on the phone. I imagined her sitting on the far end of our red sofa at home, the receiver cradled under her chin in front of our big bay window, her feet tucked beneath the coffee table.

But her comment bothered me at the time. How could three decades pass without getting a cup of coffee with a friend? Yet perceptions of time and distance can change. I’m now slowly beginning to understand its strange effects.

Those effects cut both ways. The distance of my American friends makes me grateful for the ones I’ve made in Italy, people who continuously impart cultural lessons from the significant to the mundane.

For example, I’ve learned that children in Scandinavia commonly watch English language TV shows with subtitles. When I asked my Swedish friend how she spoke English so well she answered, “‘Friends,’ of course.” My Mexican friends are all elegant dancers thanks to rigorous quinceañera practice. They’re also fond of and tajín, a spicy red seasoning that while overpowering to my palate is generously sprinkled on fruit like sugar.

After decades of Catholic school and a Jesuit college education, I finally met my first Muslim friend. We talked about how he missed Egyptian cuisine and he spoke eloquently about his faith. The misplaced pity I’d felt when I saw a woman wearing a headscarf (what did I really know about her?) was replaced by reverent curiosity. I’ve learned that in the Netherlands a cold lunch is the norm and three kisses mean hello and goodbye. I’ve danced at a ceilidh in Scotland and now understand that an Edinburgh accent is easier to decipher than one from Glasgow.

“Where are you from?” my Glaswegian taxi driver asked me when I first arrived at the airport.

I know that in Spain children wait for the Three Wise Men on Christmas Eve and in Amsterdam Santa Claus arrives on a boat from Barcelona, where he’s been vacationing for 11 months.

I’ve learned the word for tipsy in Arabic and Happy Birthday in Nepalese and the tradition behind Holi, the Hindu festival of color.

I know what dialects are spoken in Ethiopia and that a classic Lebanese breakfast is fatteh (chickpeas, bread, and thick yogurt). I know Italians will never leave the house with wet hair and are suspicious of air conditioning. Armenians understand and speak Russian quite fluently because of 70 years of Soviet rule. I now consider Ukrainian one of the loveliest languages I’ve ever heard.

Origins seem to matter less and less as time goes by. I feel I’ve become more malleable, more adaptable. I know more than I did last year or even last month. These friends, of course, will eventually leave, too. Their scholarships will finish, or their visas will expire. Family, work or a sense of duty will call them back (or even nostalgia for a Lebanese breakfast). Some I’ll still hear from, others, over time, less so. I wonder what, if anything, they learned from me, if they’ll remember my American dialect, my patriotic love for peanut butter, or just a girl who tried her hardest to pronounce “thank you write soon” in Arabic, Russian, Italian.