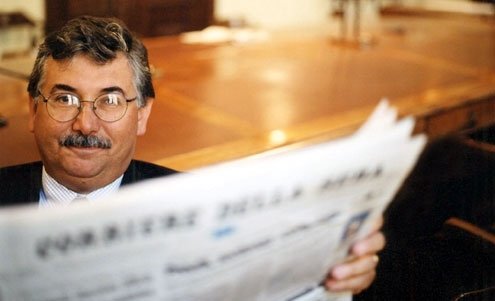 n 2007, Gian Antonio Stella and Sergio Rizzo’s denunciation of Italian pork barrel politics La casta. Così i politici italiani sono diventati intoccabili (“The Caste. How Italian Politicians Became Untouchable”) sold more than a million copies in a country where 10,000 is considered respectable and 100,000 a howling success. While the sales figures may have been a novelty, the success of the “The Cast” merely confirmed Stella’s status as a bright light in the fog of Italian journalism.

His latest effort, Negri froci giudei & co. L’eterno guerra contro l’altro (“Niggers, Fags, Kikes & Co.: The Endless War Against the ‘Others'”), returns to the formula that has served his readership so well. Stella’s examination of racism and intolerance in Italy is an amalgam of first-hand reporting, killer anecdotes, empathy, humor, all of it reliably attributed.

Stella has tackled racism before. In his 2003 book L’orda. Quando gli albanesi eravamo noi (“The Horde: When We Were the Albanians”), Stella deflated the cherished domestic idea that Italian immigrants were better behaved and thus deserving of better treatment than the noisy and often delinquent Africans, Romanians, Ukrainians responsible for cleaning Italy’s streets, harvesting its crops, and caring for young and elderly alike.

In “Niggers,” Stella examines a 1,000 years of intolerance and hatred: ethnic, religious, tribal, sexual and social. Such venom, he observes, is sadly universal. No known society has failed to denigrate outsiders in its search for identity and cohesion. The Athenians trashed the Spartans. The Greeks disparaged the Romans. The Genovese ridiculed the Pisans. Back and forth it went. Inhabitants of one riverbank routinely slaughtered those who lived on the other side. In many languages the very word for “human” is synonymous with the group doing the naming: Rom and Inuit for example. Likewise, the homeland is the world’s center. Greece was the omphalos — the world’s navel. China was the Middle Kingdom, the harmonious and sweet-smelling center of it all.

Smell is no joke. Stella dedicates a full chapter to this primal sense of otherness. The others literally stink. Jewish odor, the foetor judaicus, has been a pillar of anti-Semitism for centuries. Nineteenth-century New Yorkers insisted you could ferret out Italian neighborhoods through garlic fumes. The words of Swiss sanitary inspectors once used to describe Italians are identical to those a recent mayor of Treviso used to portray Africans. In one exceptional anecdote, Stella recounts how Indonesian cannibals, while describing how they cooked their enemies, gingerly shifted around Western researchers whose smell disgusted them.

The most common practices for the nourishing of hatred are universal and timeless. They include distorting facts, rewriting history, abusing science, and destroying all evidence that doesn’t coincide with the “accepted” view. Hitler wasn’t a beginning or an end. Chinese emperor Shih Huang-Ti tried annihilating all traces of the philosopher Confucius in the second century B.C. The Alexandria Library was sacked and burned by invading Muslims in 641 A.D. The Bosnian national library in Sarajevo, host to a multicultural past, was torched by Serbian artillery in 1992.

Stella’s catalogue makes for dismal reading. Since we’re all so deeply implicated and guilty, how can we justify our criticism of others? With racism seemingly innate, it is easy to feel resigned to the inevitable. That’s a part of what makes us human.

But Stella doesn’t allow the “everybody else does it” thesis to let Italy off the hook. He attributes Italy’s racism to its failure to atone for Fascism the way Germany has tried to atone for Nazism. Nor has Italy fully accepted responsibility for its brutal spurt of 19th-century European imperialism, including its 1930s invasion of Somalia and Ethiopia, when it used internationally-banned poison gas. The Italian government finally owned up to using the gas, but only in the 1990s. It has never honored requests to prosecute perpetrators of Ethiopian war crimes.

Stella won’t abide the classic Italian declaration, “I’m not a racist, but….” He notes that Italy has the most xenophobic soccer-fan websites. Though Immigrants contribute almost 10 percent of Italy’s GNP, polls show that 51 percent of Italians say immigrants threaten their security. The number is 14 percent higher than in Britain and 21 above Germany. Italians are convinced that the two percent of illegal immigrants in the country commit more crimes than all Italians — this in the land of organized crime and mass tax evasion. Italian public figures routinely use appalling language when discussing other races or religions or gays. When reprimanded, they pull the “I was just kidding” defense.

At the book’s presentation at the headquarters of the Corriere della Sera newspaper in Milan, Stella shared the stage with Pap Khouma, the Senegal-born journalist and Enzo Bianchi, a monk and pacifist. They agreed that hate was fear’s common thread. They also agreed that ignoring differences — insisting, that is, on the mirage that we’re all alike — was as risky as emphasizing the differences themselves.

But in the end, fear is a result as much as a cause. It feeds on itself and lends itself to inflation and manipulation, particularly in a television-dependent nation such as Italy. Stella noted that media use of use of the word “racism” and words like it shot up just around election time in 2008.

No wonder the back-flab blurb quotes Franklin D. Roosevelt famous line: “We have nothing to fear but fear itself.”