The Girl in the Polka-dot Dress 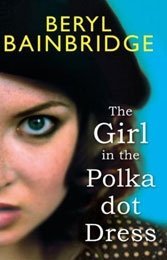 In arguably her finest novel, 1998’s Whitbread Winner “Every Man for Himself,” Bainbridge (1932-2010) used the Titanic’s ill-fated maiden voyage to lay bare the foibles and doubts man named Morgan, nephew of the White Star Line owner. Through him, an epoch rises and falls, the epic ship with it. In this, her final and posthumous novel, tidied up by friend and editor Brendan King, she rounds out a career in the service of what might be called embroidered fiction, in which big events as make-believe’s human props. Rose, a working class British girl, travels to tempestuous 1968 America in search of a man named Dr. Wheeler, whom she met as a teen and has exerted an ambiguous spell on her ever since. In Baltimore, she meets a “friend” of Wheeler, a melancholy widower named Harold, who tries to ferry her cross-country in Wheeler’s elusive direction. Traveling in a van, the odd couple bounces off a bank heist and stabbing. The specter of political intrigue looms in Harold’s, and Wheeler’s, past. Rose is unkempt and quirky, with a sullying family history; Harold is depressive, his own past similarly disheveled.

References to Martin Luther King’s assassination crop up menacingly. A man named Fury ruminates angrily on “shoddy” American foreign policy and astutely calls Richard Nixon’s personality “a perfect mixture of rage and caution.” Bobby Kennedy enters the picture, since Wheeler might be working in his campaign. In a diner, as the odd couple reach Los Angeles, Rose casually bumps up against Jordanian named Sirhan in a diner. These loose ends will meet.

Bainbridge is remarkably at ease with naive but determined Rose, whose American odyssey is both humane and credible. Most British authors trip over the details of American life. Not Bainbridge. Her sense of person and period is keen. She “gets” paranoia and menace and transmits a sensory awareness of late 1960s American disillusionment. Like most posthumous novels, there’s no knowing what final touches the author would have applied to the occasionally choppy manuscript. What’s not at all choppy are the inhabitants of the story, and the historical kicker, which gives the novel its logic and makes it a worthy end piece to an inspired career.