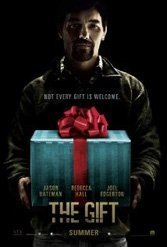 Australian writer-director’s Joel Edgerton’s psychological thriller immediately dives into an abyss and never surfaces. Affluent, thirty-something young married couple Simon (Jason Bateman) and Robyn (Rebecca Hall) has moved from Chicago into a Los Angeles suburban home. Successful Simon is a native of the area and a freshly promoted security software salesman; she’s a designer fresh off a miscarriage, which accounts for their move. He’s driven. She’s smart but gullible.

By chance they meet Gordo (Edgerton), Simon’s high school classmate once known as “Gordo the Weirdo.” He’s no less odd now, bearing gifts, showing up unannounced, and zeroing in on tolerant Robyn in ways that put flirtation and menace on competing low boil. He served in the military, or so he says; he also says he forgives Simon for an unnamed high school transgressions, suddenly suggesting that class president Simon and weird Gordo are connected in ways Robyn can’t know (but wants to).

So it is that goldfish die and a pet vanishes, events that Simon pins on Gordo. Eventually, however, the tables begin to turn. Robyn’s concerns about the interloper are refocused in “Who did you marry?” style. That’s about the only predictable aspect of a deftly assembled story about real and imagined torment, unpunished misdeeds, and the wages of evening the score. Australian Edgerton, in his feature debut, borrows from a variety of influences but copies no one, instead forging a “unstable waters run deep” mood, “Rosemary’s Baby”-style, one that thrusts Robyn to the forefront and tightens its grip as she enters the Simon-Gordo rabbit hole. The wicked kicker is the gospel according to Gordo: “See what happens when you poison other people’s minds with ideas?”