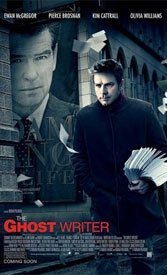 In Polanski’s cunning political thriller, a ghostwriter assigned to write the memoirs of a former British prime minister is gradually sucked into intrigue he neither expected nor can handle. On the face of it, Polanski’s minor league “North by Northwest” might seem hackneyed. The film is based on a novel by disenchanted Tony Blair critic Robert Harris. No wonder his Adam Lang (Pierce Brosnan), the fictional British politician whose memoir drives the story, is an affected mime of a U.S. lackey. But Polanski mostly shakes these tedious shadows.

When Lang’s first biographer drowns accidentally, a successful ghostwriter (Ewan McGregor) reluctantly agrees to step in and polish up the book, already in draft form. But as soon as the writer flies to the rainy, windswept Cape Cod island called Edgartown Vineyard where Lang now lives with his wife, staff, and security contractors (“Shangri-La in reverse,” says the writer), the former PM is publicly denounced by his one-time foreign minister for having facilitated extreme rendition and torture. The U.N.’s Hague hounds are out for blood.

As the suddenly besieged writer reluctantly digs into his task, he stumbles on cryptic materials concealed by his dead predecessor. Polanski tosses out red herrings aplenty. Was Lang a CIA plant? What is his relationship to a Yale professor (Tom Wilkinson) cast in the Paul Wolfowitz vein? What role did a secret fellowship called Arcadia play?

Throughout, Polanski deliberately keeps the narrative on awkward and surreal footing, making Lang seem just a trifle too dull to achieve villainy. Instead, he’s a Nixonian Blair (“Let me make one thing perfectly clear…” he tells TV). Even more ambiguous is Lang’s brilliant but sour wife Ruth (Olivia Williams), a former political activist who draws sexual circles around the writer. Is she ruing her St. Helena-style exile or intentionally distracting him? Why does the sun never come out on the island?

A thriller that asks more questions than it chooses to answers is usually a good one, particularly in an era when being obvious is all the rage. Polanski wonderfully drafts grand old man Eli Wallach for a craggy cameo to deepen the dread. It works. These isn’t much that doesn’t, a tribute to Polanski’s Mamet-like pacing and storytelling professionalism.