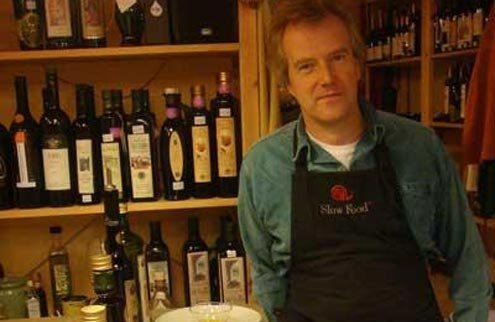 Johnny Madge: A labor of love in Lazio.
E

very now and then, Italy presents me with what I call a “Mary Poppins experience.” I am crisply striding along in sensible shoes thinking rational thoughts when I’m suddenly popped unexpectedly into another reality, a fantasy world.

Just the other evening, I was climbing the damp, winding cobblestone streets of Casperia, a medieval Lazio borgo an hour or so north of Rome and not far from Rieti. Silence pervaded. I passed through the Piazza Municipio and onto the Via Garibaldi. No sign of another soul. Just the faint autumn smells of wood smoke and fallen leaves.

At number 55, I came to a wooden portone with a small, metal gecko lizard attached to it. I knocked. The door opened warm, yellow light poured out onto the street. Johnny Madge, the owner of the Enoteca Gecko, smiled broadly as he said, “Hi there, come on in!” I had the feeling that I had discovered a secret speakeasy as Johnny escorted me into the small, stone vaulted room and to the bar where Carlo, his friend and assistant, was pouring glasses of wine.

Johnny, a soft-spoken and easy going Brit, came to Italy 29 years ago hoping to learn the art of marble sculpting. He fell in love with an Italian woman and Italian olive oil, and never looked back. And, then, Johnny claims, he discovered wine as a casual afterthought.

His wine selections, however, seem to be anything but that. Each comes from a producer within a few hours drive that he knows personally. While, in general, his neighboring wine regions of Lazio, Umbria, Abruzzo and Campania produce fewer exceptional wines than regions like Tuscany or Piedmont, Johnny has found hidden gems: artisanal wines made with a passion for quality and a knack for expressing their terroir. All have been recognized in SlowWine 2011.

While Carlo prepared bruschette doused lovingly with various prize-winning olive oils (the only food served, but you can bring your own “picnic”), Johnny began lining up bottles to taste. And one bottle at a time, he shared his secrets with me, a true “Mary Poppins experience”.

I have listed the wines below in the order that we tasted from the lightest whites, to the reds, then, the dessert wine. They generally range in price from €7-25 range with a few up to €40.

If you want to go to either to taste wine or buy bottles to take away, the Gecko is generally open on Fridays and Saturdays from 7 p.m. to 10 p.m. (text Johnny’s cell +39.328.3398.479 to confirm) or by appointment with Johnny (oliveoil@johnnymadge.com). He also does custom olive oil and wine tours.

— Rose Brut, La Palazzola 2009 (Umbria): La Palazzola, owned and run by Stefano Grilli, is located in Vascigliano, in the rolling hills about 90 minutes north of Rome. This metodo classico sparkling wine is made with 100 percent pinot noir grapes like a traditional “blanc de noir” in Champagne.

— Paestum Fiano, Azienda Agricola San Giovanni IGT 2006 (85 percent fiano + greco di tufo + trebbiano) (Campania): A lovely, light (12.5%) but distinctive white produced in small quantities (10,000 bottles) just north of the ancient Greek temples at Paestum. The delicate fruit and floral flavors are tinged with saltiness since the wine is made organically beside the sea.

— Donnaluna Fiano, Viticoltori di Conciliis DOC 2010 (Campania): Alessandro, Bruno, Luigi and Paola De Conciliis make wines in small production from native grapes in Prignano Cilento, just south of Salerno, 13 kilometers inland. Though they’re serious about quality, the label of this 100 percent fiano has the name written upside down, just for the fun of it. The wine (13%) is slightly more structured, less acidic and fruitier than the Paestum Fiano (above).

— Poggio della Costa, Sergio Mottura IGT 2010 and Latour a Civitella, Sergio Mottura IGT 2009 (Lazio): Two notable 100 percent grechetto wines by Sergio Mottura in Civitella D’Agliano, 120 kilometers northeast of Rome. The first (13.5%) is made without fermentation or aging in wood is the only wine from Lazio ever to receive the coveted “3 bicchieri” from Gambero Rosso. The second (14%) is almost identical except that it is aged slightly in large oak barrels, giving it more structure and a hint of exotic fruit flavors. Mottura has a restaurant and hotel called “La Tana dell’Istrice” (The Den of the Porcupine), hence the porcupine on the wine labels.

— Castellabate, Azienda Agricola San Giovanni IGT (Campania): Made in the Cilento Nature Park from vineyards that literally hang over the sea (same as Paestum Fiano above), this 80 percent aglianico and 20 percent piedirosso blend (13.5%) is a structured wine and a remarkable expression of its terroirthat goes best with meat or aged cheese.

— Toni, Cataldi Madonna DOC 2006 (Abruzzo): L’Azienda Agricola Cataldi Madonna makes this 100 percent Abruzzo montepulciano in Ofena, half way between Aquila and the sea. This mountainous area is subject wild fluctuations in day-night temperatures. Only 7,000 bottles of the wine (13.5%) are made annually and it’s among Johnny’s favorites, a structured masculine wine that’s rustic but elegant.

— Quinta Regio, San Savino Poderi Capicci IGT 2005 (Le Marche): Produced near the sea, south of Ancona, the wine is 100 percent Abruzzo montepulciano made from 30-year-old vines. The name derives from Imperial Rome when the area was known as the Fifth Region of the Empire. It is structured (14.5%) and expresses the true flavor and complexity of montepulciano (mature fruit flavors, an earthy spiciness, and strong but balanced tannins.)

— Vendemmia Tardiva da Uve Muffate, La Palazzola IGT 2009 (Umbria): This Vino Passito, by La Palazzola (see above), is a dessert wine made from grechetto grapes left on the vine subject to “noble rot” or “botrytis,” the same process used to make Sauternes in Bordeaux or Tokjai in Hungary. It has a crisp acidity to contrast a sweetness that’s not too sweet.