The Garden of the Finzi-Continis 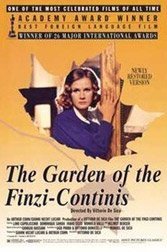 After Benito Mussolini’s regime ended in 1943, Italian artists used cinema to express the period’s pain and injustice. The neorealist movement probed the limitations of the human condition when trapped in the virulent throes of socio-political turmoil. Director and film craftsman Vittorio De Sica, deft in his grasp of the melancholy, helped spearhead the movement.

His 1970 “The Garden of the Finzi-Continis,” from Giorgio Bassani’s 1962 novel Il giardino dei Finzi-Contini, was the first major Italian production to focus on the sensitive topic of anti-Semitism (Mussolini came relatively late to Hitler’s hatred, passing his own set of racial laws — the leggi razziali — in late 1938.)

In the small northern city of Ferrara, the wealthy Jewish Finzi-Contini family remains locked away from the outside world on its large and herbaceous grounds. After Giorgio (Lino Capolicchio), a middle-class Jewish student, is invited into the garden, he tries to rekindle his childhood romance with the quite remarkable Micol Finzi-Contini (French actress Dominique Sanda). This provincial love story runs parallel to the toughening of the Fascist regime. As swastikas begin to appear on bicycles, the extent of the contamination becomes clear.

De Sica uses natural elements to inform his story. The barbaric world is made symphonic through floral notes that decorate the gloom and harmonize the plot. The imagery mixes the soft touch of dandelions with the hardness of oak. Giorgio’s love is pure, but it ultimately means little in a society where faith can be death sentence.

This is a subtle work. Though it may not live up to the emotional heights De Sica reached in other works, it represents a kind of scenic shortcut through one of Europe’s most turbulent and terrifying eras. In terms of affect and optics, it endures as a lovely little gem of Italian cinema. It took Best Foreign Film Oscar honors in 1971.