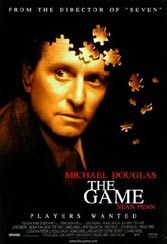 Director David Fincher depends on the fire-hungry kindling he puts between leads Michael Douglas and Sean Penn in an alluring and mysterious story about how power can be disarmed and toyed with.

Douglas is wealthy if reclusive San Francisco banker Nicholas Van Orton, and Penn his eccentric and mischievous little brother Conrad. For his 48th birthday, the inscrutable Conrad gives no-nonsense Nick a live-action “game” run by Customer Recreation Services, a pre-avatar dream-machine company that blurs the lines between actual and imagined (“It will make your life fun again,” promises its murky advocates).

Nicholas loves and lives by privacy and control, which is precisely what CRS strips him of, generating a web of conspiratorial scares that include life-size clowns. Is Nicholas a plot-victim or is this just CRS diligently merging coincidence and make believe to “amuse” him?

Clever-as-they-come Fincher (“Se7en,” “Fight Club” and a host of inferior others) is an innovator even on a bad day. Structural shortcomings are ably recouped as nervous Nicholas begins unraveling. Douglas is among paranoia’s best emissaries (his fierce face turns stricken), and Fincher’s love of claustrophobia deepens the bog in which the movie lurks. The real game is to make Nicholas a better man among men, with kindness to brother Conrad included in the human upgrade. Still, Conrad is sphynxian enough the keep the biggest surprise for last.

Like it or not, Fincher’s Folly (which has much in common with his later “Vanilla Sky”) presaged the video game plunge that has since seized impressionable minds like so many alien implants.

Fincher 2.0 — including “The Curious Case of Benjamin Button,” “The Girl with the Dragon Tattoo,” and “The Social Network” — doesn’t hold a candle to the 1990s thirty-something director who liked playing with matches.