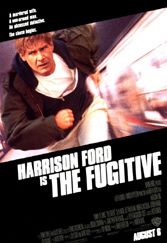 One scene endures: Tommy Lee Jones’ weary marshal Samuel Gerard confronts Harrison Ford’s graven Dr. Richard Kimble in a roaring storm drain on the lip of a dam. “I didn’t kill my wife,” says Kimble. “I don’t care,” responds TLJ. What’s superior about this thriller is that it’s sincere without carrying around Hollywood’s moralizing baggage. The wit works. The one-armed villain is a twist. Director Andrew Davis’ settles into a fast pace and lets hunter and hunted do the rest. Ford and TLJ are in rare form. Followed by an entertaining but inferior pseudo-sequel, “U.S. Marshals.”