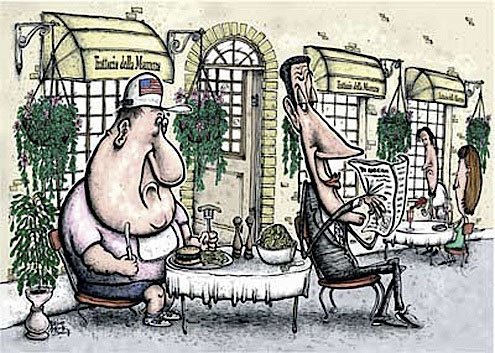 Be a good boy and eat your pasta... Drawing by Brian Adcock.
S

top picking on pasta. I used to pick on it, too — until it made me thinner. Twelve pounds (5.5 kilos) thinner, to be precise. A year ago, just before I left Miami for Italy, I weighed 132 pounds (60 kilos). I remember my friend Jorge telling me, “Be careful of all that pasta they eat over there. We don’t want you coming back looking like a big, fat Italian mamma.”

My family, my co-workers, and all my friends worried I would blow up from all the carbohydrates that Italians are known for eating due to the heavy consumption of pasta. They stocked my suitcases with all the food that reminded me of home: black beans, yellow rice, fajita mix, taco mix, and macaroni and cheese. An Italian nightmare.

Within my first two months here, I had just about finished my supply of Miami food and was waiting for my next care package.

During that transition, I was forced to give pasta a wholehearted try. There was pasta with pesto, pasta carbonara, pasta bolognese, and penne all’arrabiata. I grew bored fast. One more noodle, I sometimes thought, and I’ll start crying. I craved my black beans and rice, honey mustard chicken wraps, my platanos maduros (sweet bananas), and palomilla steak! Each time I reminisced, my boyfriend’s father dutifully reminded me how Italians had the best eating habits on the planet, and that he, at age 60, hardly had an ounce of fat on him. This miracle, he announced matter-of-factly, was a result of the Mediterranean diet.

The Mediterranean diet demands a high consumption of fruits, vegetables, bread, cereals, potatoes, beans, and nuts. Olive oil is poured on virtually all dishes. Poultry and fish are eaten in low-to-moderate amounts, and red meat is consumed rarely. According to research published by the Journal of the American Heart Association, those who follow the Mediterranean “style” of eating are less likely to suffer a heart attack and are less prone to heart disease.

What’s more, and here’s the clincher, Italians are traditionally thin, or seemingly so.

I found it hard to believe that such a diet could actually keep weight in check. There’s antipasto, pasta, the secondo, the dessert, caffè, and, forse, limoncello. How could Italians eat this way and remain stick-thin? But little by little, as I embarked on their eating habits, I began to notice the difference. My pants got bigger, my skirts got looser and my breasts shrank. Suddenly pasta didn’t seem so bad. I began thinking that Americans’ convictions that pasta was the problem was flawed.

In fact, clichés and fact are two different things. If the public is wary of pasta, American dieticians tell a different story. It’s portions, stupid, as they say.

“For Italians, pasta isn’t the main event in a meal. But for Americans, it is. Which explains why the portions are much bigger,” says Sheah Rarbeck, an assistant professor and nutrition expert at the University of Miami. Rarbeck insists portion size is the trouble-maker; big is made into good. The bigger the portions, the more we eat. Remedy? Find something we like eating.

That was an awakening. Rarbeck’s comment made me recall my Miami days, when I dabbled in every imaginable diet and exercise plan in hopes of getting a great summer look. I tried the cabbage soup diet. My best friend swore by it. You’ll lose 10 pounds in the first week, she said. Wow, 10 pounds, I thought. Fat chance.

It was totally possible, theoretically totally possible, if you could sip on what tastes like dishwater for a week. Unfortunately, I lacked my friend’s willpower. By day two I was snacking in secret. Then there was the Atkins Diet, a meat-laden undertaking that many swear by. “The weight you lose on the Atkins is fake. It’s all water,” says Rarbeck.

No surprise there. I’d tried the Atkins diet (which calls for no carbs and all protein in the first week) and after a few days felt dehydrated. I ditched it.

Then I became a gym rat. I worked out almost daily. I lost inches but not pounds. Still, I felt great — for about two months. I got to the point where I was happy with myself. Classic. I was among those who say, “Oh, I’ll go to the gym for 3 months and then I’ll be perfect.” I was convinced my body would remain the same — fit minus the gym, that is. Who was I kidding?

Then I heard about boot camp on TV. You pay someone to scream at you for an hour while you do military-like drills and exercises. Great. While I did the leap frog, Sergeant Brian screamed at me, “Move, move, move!

When I moved to Rome, I became physically inactive. Boot camp was gone and the gym and I never became friends. My Miami days faded.

But something else kicked in. For example, instead of driving to the bank, as I did in the States, I walked. And most important, I went Mediterranean. My family and friends refused to believe the change. “Are you anorexic?” they’d ask. They wanted to know if my boyfriend was starving me.

But thin is in, and it’s increasingly clear Americans should listen to Italian wisdom.

In February, The Journal of the American Medical Association reported that Americans are dying in larger numbers from obesity-related maladies, with cardiac problems in the forefront.

Experts suggest obesity-related disorders will be the leading cause of preventable deaths by next year. Two out of three adults and nine million children in the U.S. are considered obese.

Schifezze, and in large portions. McDonald’s recently decided to drop “supersize” fries from its menu in more than 13,000 American outlets.

Yet, in the midst of the outcry, still no mention of pasta. Even the hottest American diet, the South Beach Diet, knocks off carbs for the first 14 days. It also tells you not to panic. Right away that should tell you something’s wrong. Why does almost every diet go after carbs like al Qaeda?

I went to an Italian expert for some help. Elisabetta Bernardi, a sports medicine consultant and nutritionist at Rome’s La Sapienza University, vigorously defends carbs. According to Bernardi, carbs are important because they provide us with about 55 percent of the energy our bodies need to burn calories. “The secret to the Mediterranean diet is also in the amount of tomatoes Italians eat. The antioxidants in tomatoes help fight off cardiovascular disease and cancer,” says Bernardi. Go figure. I thought they were there to give the pasta a little color.

Bernardi points out that complex carbohydrates, such as whole wheat bread, brown rice, grains, fruits, and vegetables are a powerful source of energy to burn off calories. Burn, baby, burn! She also stresses the importance of walking and exercise. The U.S. Health and Human Services Director Tommy Thompson made more or less the same point to Americans recently when he recommended they park their cars a little further from the office or get off the bus a little earlier.

I asked Bernardi if cornetti were incorporated into a well-balanced Mediterranean diet. She laughed.

“No, signorina,” she said. “One cornetto has the same amount of calories as a bowl of pasta.”

I laughed back, thinking I understood. “No, I meant a cornetto semplice, not a cornetto di nutella.”

Here’s the bad news, breakfast junkies. She was talking about a cornetto semplice.