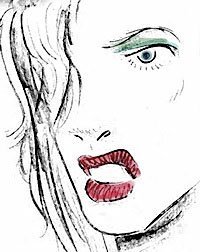 “Ooooh, what a pretty girl that French girl was. But not nice at all,” added his aunt.
F

irst there was Barbara. Then Rosa, followed by Ingrid, the crazy one. Maria’s cousin from Cosenza was close behind. Last but not least came the French girl, Amelie. There were probably others, but Fabio’s mom failed to mention them on my recent trip to Calabria.

Ah yes. Yes, indeed. She and I had the girlfriend talk.

Or should I say ex-girlfriend talk.

Let there be no misunderstanding, friends, this is one conversation I did not want to have with my future suocera.

But she obviously felt that it was important.

So be it. It came up one day when I returned home from the beach. Fabio, naturally, was at work.

As I strolled through the garden she invited me to sit down with her to enjoy the view. She noted that her son worked even while on vacation. “He has become so mature,” she said with pride. “He’s turned out to be a real man, that boy.”

I listened and nodded. “You know, much of the credit I must say has to do with you. Behind every good man there’s a strong woman by his side.”

This was big. Great strides for me, I thought. How long had I awaited those words!? Acceptance.

And then came the sucker punch.

“You know, he just wasn’t the same with all of those other girls. Take the French girl for instance. What was her name?”

She stands up and begins describing the girl with her hands. I’d never seen the girl and frankly, didn’t care to have an image in my mind. Out of sight, out of mind is how I would have preferred it.

But his mom wouldn’t hear of it.

“She was tall and blonde, like a model. Very pretty girl. But she was very cold and had a dry personality,” she said very disapprovingly. “She was also an atheist.”

I stopped her mid-conversation and insisted that further specifics weren’t necessary.

In walked Fabio’s father and aunt. And they too, decided to add their two cents.

“Ooooh, what a pretty girl that French girl was. But not nice at all,” added his aunt.

Then it was dad’s turn. “Yes. But Nicole, you are prettier. But not just because of looks but because of your warm personality.”

This was major TMI. Too much information.

I could hardly imagine my parents giving Fabio the same lecture, running down the list of my exes in detail: Kevin, my first kiss; Eddie, the baseball player-turned-hot-looking-firefighter; Jean, the Argentine; Marcos, the basketball player; Jimmy, the blue-haired surfer; Jorge, the Venezuelan model turned gay, and Alex the Great.

I’d have been mortified.

I’m sure Fabio would have been also, had he known what was going on.

Being a good sport, I forced a smile.

But then came another sucker punch. Whoosh. “This is why when Fabio met you, he broke up with that girl. And she went back to Paris,” his mom said.

Hmmm. Fabio had cleverly left out this detail in the ever-so-brief discussions we’d had over his former flames. Again, I tried rising above it. “Well, what’s in the past, we’ll leave in the past. What’s important is that we’re together,” I said convincingly.

Um great. I couldn’t wait for Fabio to come home.