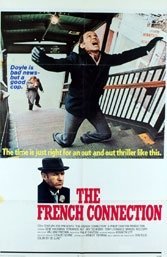 NYPD narcotics detectives Doyle and Russo make a heroin bust after what seems like a routine stakeout. But oddities and inconsistencies suggest a more sinister picture. Director William Friedkin opens his thriller in Marseilles, where the murderous Chartier makes a set-piece appearance, only to switch the focus to the seemingly hapless “Popeye” on his stakeout while disguised as Santa Claus. It’s a perfect intro into the scruffy American big city of the 1970s. Cars make the difference. There’s classic chase and a winner-take-all stripdown.

Doyle is as preternaturally antisocial as the slick Chartier is polite, oiling the cat and mouse game. Doyle’s unorthodox methods roil higher-ups and put him on the wrong side of right, another plot lubricant. As with many crime thrillers of the period, this one was based on a true story, with Freidkin briefly getting cameos from NYPD detectives Eddie Egan and Buddy Russo. Friedkin and Hackman won deserved Oscars.