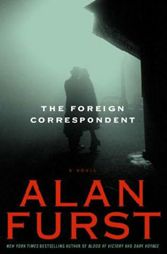 Furst’s narrator is émigré Italian journalist Carlo Weisz, an anti-Mussolini Triestine (and Oxford dropout) who “somehow” works for the “Gay Paree” bureau of Reuters. He also edits Liberazione, a local Resistance newspaper (non-communist, Furst takes pains to note) that’s smuggled into Italy Editorials are “passionate and operatic,” Paris is “this moody city,” and Ezra Pound (not named) “some American who loved Mussolini.” When dissidents meet up, it’s all bad: “Europe is dying, my friends.” Why? “Hitler’s looking for a brawl.” The sex doesn’t help. Weisz’s hip Berlin lover Christa von Schirren is “modestly depraved,” has a whippet called Magda, and at one point tells besotted Carlo she’s about to do “something I have wanted to do for a long time.”