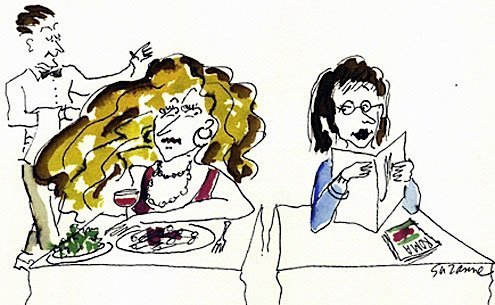 I cased the joint, seeking a room full of Italians.
W

I am lucky to have rarely felt excluded from anything, but I empathize with those who are edged out because of race, sex, religion, ideologies, or any other reason. I can only imagine the pain they endure over years of persecution; the brave Rosa Parks who would not give up her bus seat, for example, or the millions of ethnic peoples who are ostracized for simply being alive.

These are the serious cases. Then there is the matter of seating in Rome’s restaurants.

We who began our love affairs with this city in our wild youth when the last vestiges of la dolce vita still shimmered in the traffic-clogged streets and the inhabitants of a city that now lives in tennis shoes then dressed to the teeth (even in summer) and paparazzi flashed their way through throngs of wannabes, attempting to catch Sofia or Federico emerging from dal Bolognese or Canova (no Rosati for Fellini), now have in our address books or in our weakening memories the names of trattorie all over Rome, or at least in our own neighborhoods, where we can drop in after a quick call and be greeted warmly by the waiter or owner or cook and be placed among the Italians rather than in what I call “the foreigner room.”

But it’s not a slam dunk.

Although my Italian has improved, and although my eating partner is a man who lived in Rome for 10 years and continually draws praise from Romans for his prowess in Italian and romanesco, I am more often than I like shuffled into a room in which English and other languages predominate.

In fact, we’re here to be among other nationalities, other languages, other cultures. I’m just not that excited about being selected to eat with the non-Romans. Many tourists choose to be with others like them, especially where the enigma of a menu in a foreign tongue adds anxiety to the difficulties of traveling with one’s roots dangling.

Still, when I first arrived in Rome, the excitement and challenge of a menu in another tongue, the fun of pronunciation, the living-by-the-seat-of-your-pants thrilled me. I did not want to eat with Americans; I did not want to have conversations with Americans; I wanted to pass for anything other than American. Not for subversive political reasons, but because my California dreaming was of being in Rome among Italians, of being linguistically and culturally assimilated as well as I could be.

In my early days, I only briefly visited Rome and family. Why would I want to spend those few short and precious days among people from the same home town, so to speak?

Not me. Travel is to get away, jump without a net, take a bumpy road with no SUV. So as I entered ristoranti, I cased the joint, insisted on a room full of Italians, and spoke only Italian to my partner and the waiter, even as he kept practicing his English with me and blowing my imagined cover!

Reverse discrimination? You betcha. Wasn’t I just a bit disdainful of the Americans in their travel-weary pants suits and gym shoes, looking uncomfortable and painfully homesick, searching for a friendly face or at least help with the daily specials?

What a phony I was, with my Italian-y tousled, hair, corals and linen clothes. Wasn’t my longing — not for a sex change, but for a full nationality change — about as self-deceptive and exclusive as I could get? I pondered this as I left a career and friends behind to move from LA to Europe. It didn’t take long to see flaws (well, a few years, but some are more myopic than others).

But I live here now. I know where to get the best treccia of mozzarella, the best pizza bianca. I shop in Campo dé Fiori and banter with the sellers; I have a picture framer, electrician, cartoleria, a favorite trattoria. My days are full of everything Italian, the good, the bad and the ugly. I love it. But having devoted time to that never-to-be realized attempt at becoming Italian has mellowed the desperate part of me that once cringed at exposure.

Seating is now less important. When Italian tourists began to stop me for directions I knew that it wasn’t because of my face or my clothes, it was that I was and always will be now a part of Rome, American (well, Texan, even worse) or not. And Rome had always been mine. And because it was mine, I wanted to share it.

So now, if a (naïve!) waiter throws me in with the tourists, I go, if only to strike up a chat with the next table and hope that a few suggestions for Roman dishes or some good tips on shopping in my hometown might alleviate their feeling of having been, rightly or wrongly, excluded.