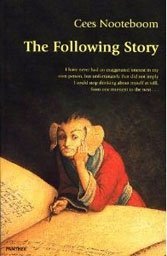 By Cees Nooteboom, translated from the Dutch by Ina Rilke

On the night of Herman Mussert’s death, he’s dreaming. Or is he? He’s in… Amster… No, wait… maybe he’s in a Lisbon hotel. Or on the deck of vessel plowing toward the River Styx. No, make that the Amazon. And what about the ghosts of Enrico Fermi (become Father Fermi, a cryptic priest) and Deng Xiaoping (become Professor Deng), a Chinese scholar.

To read Nooteboom’s intricate novella is to enter Bosch’s “Garden of Delights,” where time and nature are warped but forced constantly to co-exist.

But back to the “beginning,” which Nooteboom presents as one of many false starts. Mussert, a staid Latin grammar school teacher-turned-travel writer, a “schizoid garden gnome,” wakes up “mortally quiet” with the “ridiculous feeling” that he might be dead. Flashback to Mussert’s time as “Socrates,” teacher and translator of Ovid’s “Metamorphosis” in an modern-day Amsterdam grammar school.

At the school, he fell for fellow teacher, Maria Zeinstra, who slept with him in revenge for an affair her husband carried on with beautiful colleague Lisa d’India. This mess led to Mussert’s dismissal and his transformation into Dr. Strabo, bachelor travel writer and author of “Travel Guide for Portugal.” Since he once spent tryst time with Maria in Lisbon, maybe this hotel room version of self is an avatar of personal metamorphosis. But Mussert is bewildered and adrift. “You can’t be both in the story and not in it,” he keeps telling himself.

Ah, but you can. Nooteboom’s magic carpet ride is a meditative fable about mortality and limbo. The Latin classics Mussert swears by betray him. He is “the liquid I,” neither here nor there but, like the author, intellectually aware of both. Straddling past and present tense, life and death stand still. “The world is a never-ending cross-reference,” says Mussert. “Some people are fated to have been everywhere before…” Never mind Date’s upper floors and lower, Nooteboom put his Mussert in an endless and terrifying loop.