The Flavor Of Wind 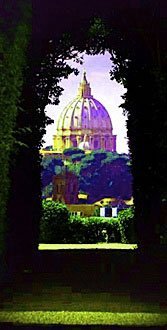 You take her to where St. Peter’s has been inserted into a keyhole (or so you wish to say), and she sees it.
Y

ou decide to tell her about the flavor of wind. How disbelief can suspend the passage of time. How illumination can make gulls loiter like hungry kites over inert monuments. How ruins can imitate candy houses on a wedding cake.

But she interrupts your cosmic sizzle.

You know her eyes and the sized-up awe they transmit.

The bricks, she says. Tell me about their mystery.

Suddenly, you’re two children in the why of Rome.

Bricks, you want to say, are made from terracotta. Emperors found them in umber rivers and borrowed their thick and practical hues. Bricks came to be bricks from bees, the hearts of honey. To make a brick, all must congeal sweetly.

But sweetness is what she induces. Or so you’ve decided.

Seriously then, she asks (and rightly), what about that column?

Ah, the column. You are now wandering through the center of the city.

The column, you say, is an tall snapshot of wars and love affairs and ambition gauzed to suit a marble bone. It memorializes the once-upon-a-time traffic of brazen spears and alabaster vanity.

There are other moments of course. In the garden above the Tiber near the Knights of Malta, for example.

Those, you say, can’t be feral cats. Look how friendly they are. They’re unbothered by the rubbing grazes of visiting hands.

A cat sanctuary on a sunny day.

And near the sanctuary, you take her to where St. Peter’s has been inserted into a keyhole (or so you wish to say), and she sees it. The day, you think, is finding its center. A touristy woman descends from a car of friends and peeks quickly into the hole. “Oh my,” she exclaims, as if she’s been handed a grand gift by an impossibly magnanimous stranger. “Oh my!” The touristy woman is now a spree of giggles.

You smile. She smiles. Her eyes are enormous.

You decide to tell her about the flavor of wind. How it descends from lapses but defers incurably to hope. She deserves to know.

You elude her practical questions. Who’s atop the column? she asks.

The problem, you rationalize in your own defense, is how Rome propagates indifference. History helps itself to such imprecision.

But she relieves your confusion. What about Venice? she asks. How did they do that?

In a dream, you know you answered her question. It was years ago. You first told her the history of the city, then positioned her in front of a canal-side chapel and took her photograph. She looked like a saint you loved in a book.

You imagine the answer, a whim, in your head. Half-men, half-fish, the Venetians parted the sea to invent a city like no other. They put aside gills and became merchants, copying what they saw around them. This is how Venice came to be. But you don’t say it.

Instead, you talk of marshes and slippery land where everything was done stone-by-stone. Venice, you say, was a moat of riches created in a lagoon no one would think to sack. Doges and dogs had equal privilege. The Orient, given European bearings, suddenly made sense. But from the start, you caution, it all began to sink.

What you don’t like about the truer story is its inexorable side. That she might seize on it and blunt you. But she doesn’t. Her smile is at rest.

How does love endure? you ask yourself. You’re sitting in the shade near the carousel you insist has grown from the ground like a happy weed, the whim of a child’s fast blinking. She might have said you’re silly, which you are, but she didn’t. And that, you think, is how love endures.

Finally, at dinner, the flavors are real.

Rome, you say, suits her. You believe this certainly.

What’s that on your plate? she asks. The twigs are green and curled.

But vocabulary deserts you. Specificity — the exactness of things — quits its pretenses. You’re in the sway of apparitions.

You know Venice was not sculpted from water. You know the umber river never loaned its hues to brick. Not even to emperors.

Yet there she is.

You mean basil, she smiles.

Yes, yes, of course she’s right: it’s the minty recoil. Unmistakable. Obvious. By now, you should know better than to misstate the obvious. You should know to see. But better is often unreachable. So you tell her instead about the flavor of wind.