The Flavor of Flavia 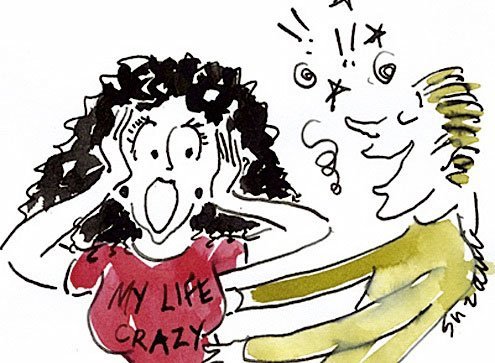 Sexy even when she wore a bright pink T-shirt that said "My Life Crazy."
I

knew two things about Napoli before I met Flavia. They had a football team who were once champions of Europe and their summer lasted for about five months. These two things were more then enough to prise me away from grey, old Dublin after knowing her for little more than 10 days.

Needless to say she was beautiful and after a life being brought up in rural Ireland where the occasional mistaken eye contact was as passionate as things got, it wasn’t hard for me to fall head-over-heels in love with a hot-blooded Napoletana.

When she smoked she was sexy, when she spoke bad English she was sexy, hell, even when she wore a bright pink T-shirt that said “My Life Crazy” on it, she was sexy. Scraping as much money together as I possibly could, I followed her down to Napoli and she helped me rent an apartment in the centro storico.

Perfect, or so I thought until the first day when we’d finished cleaning my little monolocale. After lighting up what must have been her hundredth cigarette of the day, Flavia informed me that she’d have to go home to her parents that night. “Amore, let’s wait a while before I tell them about you. Now’s just not the right time. I have to wait and see what Papa and Mamma say. You understand don’t you?”

We were both in our mid-twenties, was it really that normal to still need our parent’s approval before we made decisions, and hadn’t I just given up everything to be with her? I was left alone in Napoli with no Italian and a warning not to leave the house until she returned the next day.

That night was the famous blackout of 2003 when most of France and Italy — especially the south — were left without electricity for over twelve hours. “Amore,” my girlfriend whispered down the phone, not wanting her parents to hear, “are you okay?”

“I’m fine,” I told her, trying to suppress the rumbling noises from my stomach. Just then I was interrupted by a knock on the door. It was the daughter of my landlady. As I was unable to understand a word of her rich Naples dialect, she resorted to gestures. I finally realized she was inviting me to eat with her family.

By candlelight each member of the family tried their best to teach me dialect, and by the time we were drinking Limoncello and waiting for the coffee to brew, I could say a few words but didn’t exactly know what they meant. The next morning my girlfriend arrived with coffee and cornetti. “’Ta post ‘o buchina mia,” I said eager to impress her with my new linguistic skills. Her dark, tanned face turned a brilliant white and her mouth dropped wide open in horror.

From that moment on our young relationship evolved in giant, dramatic leaps. That afternoon she brought me to visit her parents. We had lunch together and with my girlfriend acting as interpreter, I explained to them how Ireland was not in the Artic Circle and that my intentions for their daughter were good.

That evening after some serious words of advice from her mother, she brought two suitcases full of her belongings and came back to Napoli with me to move in. In her opinion, it wasn’t safe for me to be in Napoli on my own. I needed more supervision and the only way she could ensure this was by staying with me in the monolocale. She decided to start teaching me Italian. Many lessons later I realized “’Ta post ‘o buchina mia” might not have been the best greeting.

About the Author: Conor Creighton

Conor Creighton is an Irish writer based in Dublin. He contributes regularly to a traveller’s magazine called “Backpacker” and write features for a number of other magazines in both Ireland and Britain. After studying English Lit. at U.C.D. Dublin, he traveled the world before arriving in Naples. He spent 15 months there as an English teacher before returning to Dublin earlier this year to pursue a career as a freelance writer. He is currently working on a novel and a compilation of writings on Italy.