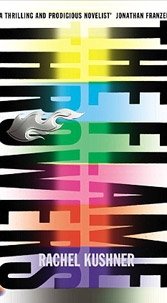 Kushner’s choppy second novel is about a speed-loving young woman from Reno, Nevada who lives for motorcycles (she sets the women’s land speed record), Land Art, and amateur moviemaking. “I come from reckless, unsentimental people,” she says, though the “I” never gets a name. At 22, she settles in New York where she falls for “expat” sculptor Sandro Valera, a wealthy thirty-something Italian tire and petrochemical scion (think Pirelli), first entering his messy, Bohemian Manhattan and later the mean mesh that is his haughty northern Italian family. Such social and ideological overtones are vital because Kushner has plopped her impressionable first-person narrator into 1976, when European social resentment spilled into armed revolt (witness Paris’ post-Danny the Red, the Baader-Meinhoff gang, the Red Brigades, among others).

Absorbent tissue for tumultuous times, “Reno” gets front row seats for both the vividly decadent 1970s SoHo scene and the snobby patrician periphery of the Bellagio-based Valera family. The characters around her include Sandro, the self-exiled tire company heir who sounds only faintly Italian; his American photographer buddy Ronnie Fontaine, who is wedded to anti-materialist quips (“Who isn’t a slave?”); a radical named Burdmoore Model, portrayed as a kind of Downtown Andreas Baader; and a host of incidental art-world slivers presented less like viable people than talking heads in the service Kushner’s period-piece Zeitgeist.

Since the story opens with musings from T.P. Valera., Sandro’s Egypt-raised, Futurist-loving, soon-to-be Fascist father, an Italian ingredient is a foregone conclusion. But it’s also an annoying bust. Poetic and dramatic license aside, the Red Brigades didn’t kidnap sports figures. Nor was news of their kidnappings ever buried on newspaper inside pages. More troubling, Sandro’s viperous mother and haughty brother are class system stick figures that exist only to whip up loathing for the “fabulously moneyed stupid world” that militant-heavy Rome offsets, or seems to. The precocious but “wide-eyed” narrator bears witness, yes, but fails to absorb her contrived surroundings. She is, she thinks, the “girl on layaway,” ill-defined, and as such remains on the margins of her own storyline.

Though the 1968-born Kushner craves the imagined exoticism of the mid-/late 20th-century, there’s something missing here — a glimpse of the memorable, perhaps; or simply better insight into the “why” of the times. Free-spirit “Reno,” the “reckless” would-be speedster, is ultimately shackled and sweatless, and her story burdened with dubious monologues and period-piece transparencies that, while eagerly concocted, often come out blurred.