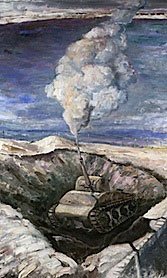 he secret romance in the American heart is not a Kerouac highway or a Redbook dream-house. It’s the urge to fix.

In mainstream TV thrillers the bad is part of the good. The bad facilitates the best in the good. Bad guys — mostly terrorists nowadays — make good guys (and girls) feel better about the ingeniously extreme measures they’ve taken to make the imagined world a more secure place. Call it Patriot Acting. In the best of the worst case, maudlin by definition, the bad realize their badness, see their lapsed compassion, and ask if they, too, can contribute to the overall fixing. They’re usually embraced. This is romantic fiction.

Iraq and Saddam Hussein were sold as threats mostly because real-life raiders counterfeited a predicament they thought they could solve. Now that the solving has emerged as a Crimean error, American myth-buyers are angry, feel cheated. When a wise-man commission recently did what it does best, stated the obvious, many nodded. Iraq, said the commission, was a terrible mistake.

America often squares its own excited circle: it concocts wars to suit proselytizing vengeance, keeps the bedroom door cracked to doubt’s night light, waits and hopes for the best, relents when obvious mistakes are, well, obvious— all to arrive at the liberal terminus, guilt. Secular guilt is where fixing goes to die and be reborn. Recently, The New York Times published a piece titled “Iraq 2013” that spoke of “bonds that cannot be stitched back together even long years after the killing stops” and suggested a less-then-pleasant Iraqi legacy. Heralding the broken is secular guilt’s catharsis. Why? Admitting miscalculation, even failure, nourishes a less bellicose side of the repair process.

If there were no Iraq the United States would invent one. The species is needed. Post-nuclear life is a series of small and midsized repair missions. In the absence of frontal war, they’re the only way to test the fabric of an affluent society against threats against it. Enemies are an accessory to an otherwise demoralizing narcissism.

Vietnam and its aftermath controlled three decades of American life, filling war’s tactile void. The Reagan years focused on the “evil empire” and produced a victory that was disingenuously hitched to a fix. But the Soviet Union had been skidding since Stalin. The 1990s snacked on Bosnia and Serbia, though Americanized NATO took its time before entering the fix-Milosevic fray. It curbed one genocide while Rwanda’s got away (as did Pol Pot’s). Cometh a September day and its transformational jolt. Afghanistan was attacked and bought off for the “right” reasons — enemies lived there — while Saddam Hussein was produced as threatening bogeymen to spice up a more hysterical form of fixing. The misdirected rage of that time has only visceral excuses.

We can thank the Hamilton-Baker commission for not being ashamed of knowing now what we could have guessed (inconveniently) four years ago. Invading Iraq was impulse-buying. Invasions don’t elicit love from the invaded, even if their boss is rotten. Invasions undertaken despite major- ally dissent are unwise. Calling the unfixable fixed — which this American president did early on — violates not actual but projected trust, which places even fiction in harm’s way. That’s a betrayal.

As success or debacle , Iraq still serves basic instinct. Terrorists are intent on their missions not only because they wish troglodyte ill-will upon infidels but because human and material destruction makes an alienated, non-cosmopolitan, often bored nation nervous and attentive (Bush’s successor cannot reverse Bush’s foreign policy; he or she can only modify it gingerly). Muslim radicals ply territory once owned by the extreme atheists of the 1970s: they push and push and hope that optimism comes undone, all culture with it. They miscalculate of course, because American fixing revels in success and suffers failure with equal aplomb. Optimism is all-weather gear.

Carrot-and-fix foreign policy won’t go away because the Iraq folly loses admirers. Making things right — and perceiving democracy as global grammar — is a millennial urge as apolitically durable as the one spiritual enterprise managed by the Roman Catholic Church (not the Christian right). Both American state and Rome church associate destiny with hardship, and hardship with hope. Both are stubborn. Both cannot survive romantically without enemies.

To wit, I keep a Gary Larson cartoon from 1983 on a kitchen wall. A cowboy faces a gunslinger who’s just shot a man dead. “OK, stranger,” says the gunslinger, “what’s the circumference of the Earth. Who wrote ‘The Odyssey’ and ‘The Illiad?’ What’s the average rainfall of the Amazon basin?” To which the exasperated cowboy says, “Bart, you fool! You can’t shoot first and ask questions later.”

Go tell that to the next romantics, Democrats or Republicans, and the commission to follow.