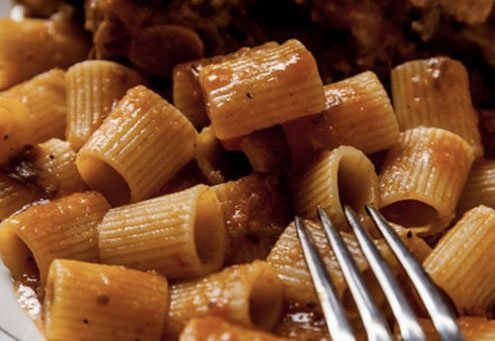 ome — home to cucina romana — has plenty of places where folks can score a decent plate of typical local pasta. But finding the best places is an exact science. After extensive research (including card-carrying access to the plus-size kingdom) I’ve prepared a detailed list of city’s signature pasta dishes as well as some of the spots that serve the best of the best. Not all have websites, but if they do they’re highlighted and list hours as well as the weekly closing day, if any.

First, an introduction: unlike Italy’s other food capitals, Rome boasts an array of “personal” pasta dishes, each one its own universe. The cucina romana‘s superb pasta, typically rich and hearty, hinges on two factors: faithful use of local ingredients and following tried-and-true recipes.

Take amatriciana. Does it really hail from the Lazio town of Amatrice, a part of the Abruzzo until Benito Mussolini redrew the country’s regional maps? Sampling it in its purported namesake town it tasted like nothing I’d ever had before and had little in common with its Rome offshoot.

Hollow, bucatini-style noodles are obligatory. Properly al dente bucatini can’t be easily twirled by a fork (please, no spoons), and that’s intentional. The amatriciana ritual requires that you suck them up vacuum-style, nonchalantly snubbing spots and stains on your clothes.

Other authentic amatriciana ingredients are canned tomatoes, chili peppers black pepper and a splash of white wine. Purists absolutely exclude onions, but many restaurants and cooks add them (I’m among them).

Amatriciana in fact derives from a much older sauce called gricia. Shepherds in isolated pastures once made gricia by gently frying diced guanciale, adding freshly boiled pasta, a healthy dusting of black pepper, and grated pecorino cheese. These were easily portable ingredients with a long shelf life. The result was a creamy grayish sauce that inspired the recipe’s name, a Roman dialect adaptation of the word grigia (gray).

Some restaurants enhance their gricias by adding a star ingredient. Among my favorites, Il Quinto Quarto (Via della Farnesina, 13), manages to include slices of raw pears, yielding a wonderful combination of texture and flavor. Another favorite, Osteria Degli Amici (Via Nicola Zabaglia, 25), see charming chef Alessandro add sautéed artichokes (when in season), creating a dish everyone should taste at least once in their life.

Next up is carbonara, the Roman classic made with pecorino, guanciale, cracked black pepper and egg yolks. Perhaps no other Italian dish is as globally copied (and distorted).

Proper carbonara contains no cream, no milk, and no butter. In fact, carbonara’s magic is all about watching the clock. The eggs and grated cheese, dotted with fried guanciale strips and plenty of black pepper, must be heated and tossed around briskly in the folds of the moist hot pasta. The intermingling creates a creamy blend that clings to the (usually tube-shaped) pasta. If your timing is off or your stove-side tossing skills poor, your carbonara will end up looking like an omelet, a sure sign you’ve done something wrong.

Another Rome pasta stalwart is tonnarelli cacio e pepe, which is enjoying a boom, so much so that even non-Roman trattorias are starting to include it on their menus foolishly thinking it’s easy to make. All you need to do is drain the pasta and dress it with pepper and cheese, right? Wrong! That’s a recipe for a peppered gluey mass of coagulated cheese and a sad waste of good, undressed pasta.

The cheese should be slowly melted with the starchy water over low flame. The pasta, meanwhile, need to finish cooking in this creamy sauce, be dusted with pepper, and tossed quickly with more pecorino at the table.

My favorite cacio e pepe haunts are Felice a Testaccio (Via Mastro Giorgio, 29), a cacio e pepe institution, and Da Cesare (Via del Casaletto, 45; tel. 06.536.015, closed Wednesday), my favorite Rome restaurant, period. And not just for their pasta.

Some city classics can be off-putting at first glance, and rigatoni con la Pajata might fall in that category. The dish that owes its origins to the 19th-century offal culture popularized by the city’s one-time Testaccio slaughterhouse. Less noble cuts of meat and leftover inner organs were often sold cheaply as butchers sought to offload what they had left, and most of the population was dirt poor. Foods made from these leavings ended up embodying a large chunk of classic Rome cooking, its cucina povera, or poor people’s food, yielding a bevy of recipes.

Tomato-based pajata sauce is enriched by the intestines of a suckling lamb. Since the milk is only partly digested, the sauce’s moist consistency has a ricotta-like feel, characterized by a sweet, gamey afterthought. Suckling veal intestines, once the backbone of the dish, was outlawed after Mad Cow disease.

For the best rigatoni con la pajata head for Testaccio and an informal trattoria called Agustarello (Via Giovanni Branca, 100; tel. 06.574.6585, closed Sunday), or to the delightful and non-touristy Armando al Pantheon (Salita dei Crescenzi, 31), a stone’s throw from the Pantheon.

Outside Rome, some of the tastiest pajata around comes from the kitchen of ebullient chef Anna Dente at her Osteria di San Cesario in the Castelli town of San Cesareo, a 30-minute drive south of Rome.

Anything that includes a tail, as in pasta col sugo di coda, may also make you squeamish. But if you’ve ever tasted braised oxtail you’ll understand why its ragù-like sauce fits perfectly with all kinds of pasta and is a popular dish among connoisseurs.

The sectioned oxtail vertebrae are slow-cooked in tomato sauce, flavored with a rich celery mirepoix, and seasoned with a dash of bitter cacao, producing a rich and dense ragù with deep, meaty flavor. A meal by itself, this is a special occasion dish made at home or as either a first or second course at choice restaurants.

My favorite oxtail spot is

Ristorante La Campana (Vicolo della Campana, 18) near Piazza Navona. Here, I like taking my time slurping the pasta and finish off chewing the bits of meat that haven’t fallen off the bone during cooking.

Last but not at all least are gnocchi alla romana, made from semolina flour, shaped into discs, and baked in the oven with flecks of butter and a light dusting of Parmesan.

But every Thursday, by tradition, many Rome restaurants make fresh gnocchi di patate using potatoes (old if possible), flour, and no eggs. The dish is dressed in simple tomato sauce or any of the classic sauces listed above. That’s the version I prefer. Many restaurants cheat and make gnocchi with dehydrated potato flour (abhorrent), so be sure to get the real thing.

I recommend L’Arcangelo (Via G. G. Belli, 59; tel. 06.321.0992, closed Sunday), a posh Prati favorite of Italian gastrofighetti (supercool foodies, if you must know). Clientele aside, there’s no arguing with their gnocchi. L’Arcangelo’s pillows of potato perfection are dressed with a classic amatriciana sauce and, hewing to tradition, made only on Thursday. They may be the best gnocchi you’ll ever taste.