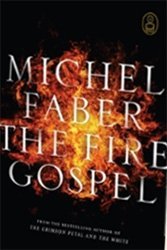 Nerdy Canadian Aramaic expert Theo Griepenkerl “happens upon” hidden scrolls following a blast at a Mosul, Iraq museum. Turns out they’re by Jesus acolyte Malchus, making his confessions a Fifth Gospel of sorts. His Christ is human, prosaic, and pees in pain from the cross while begging “please, someone, just finish it.”

Theo’s translation evolves into a mega-hit (his surname changed to “Grippen” for effect) and his American tour attracts lovers, haters, and scores of local hustlers and ignoramuses (Faber’s United States is rife with them). Theo/Faber snarls at Amazon. “I haven’t read this book yet but I can’t wait to read it so I am reviewing it early,” one “reviewer” says of Theo’s effort. The snippets make him feel like “a classical conductor forced to share a stage with a bunch of simpering pop babes.”

Faber’s incendiary parody is heavy-handed. Theo thinks his Malachus translation will give people (read Americans) “the means to break their addiction to religion, to stop worshipping the dead and start solving the problems of the living.” Fair enough. But Faber’s fifth gospel is sacrificed at the alter of anti-Christian right, Neocon bashing. Caricature supplants mystery and Faber’s usually reliable cleverness deserts him.