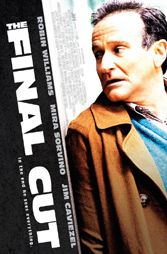 Omar Naim’s capable movie is a Baroquely Orwellian escapade into a future in which human beings possess visual memory implants (the Zoe system) that are edited upon their death and projected at a “rememory” for family and friends. Alan W. Hakman (Robin Williams) is a professional Cutter, or life editor, “a mortician, priest, and taxidermist,” as his lover calls him. But Alan has a secret: He’s haunted by a death that occurred when he was 10. As he assembles the memories of a prominent businessman (his computer program is called “The Guillotine”) he’s made to relive that event. He must also reckon with anti-implant chieftains (including Jim Caviezel as Fletcher) who want the Zoe project dismantled.

Despite stylized, stilted dialogue and a premise that never quite lives up to its own demands, Jordanian-American writer-director Naim gets a strong performance from Williams, pretty cinematography from Tak Fujimoto, and nurtures a punk-mournful “Blade Runner” landscape. It’s provocative if compressed science fiction that you wish asked more of itself.