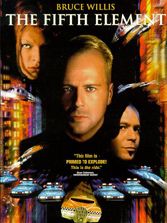 Few movies occupy their own category. This one does. It’s the lone French science fiction extravaganza made in English. Director Luc Besson (“La Femme Nikita,” “Léon”) produces oddball characters en masse and cues them up for action. Korben Dallas (a bemused Bruce Willis) is a cab driver drafted into the cause of defeating Evil, which, we learn, has woken from a Tutankhamen slumber. Dallas gets a sense of what’s going on through flame-haired Leeloo (Mila Jovovich), a perfect being from the future who’s very hot and speaks in tongues. Bottom line, if Dallas can get the Fifth Element to the right place, Evil will go back to sleep. And Leeloo, very much in her element, doesn’t take the Fifth; she is the Fifth.

Big Evil, molten and loud-mouthed, orders around terrestrial evil Zorg (Gary Oldman), who sees his bottom line improving if he stays on the right side of wrong. Oldman hams it up hilariously.

Rock is over-the-top, as is much of the rollicking, self-lampooning movie. But it’s all in good fun and so very… French.