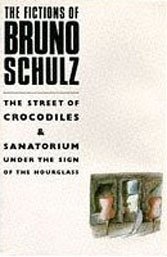 By Bruno Schulz, translated from the Polish by Celina Wieniewska

Wander into the cosmos of Schulz’s fictional autobiography and you’ll meet a boy — Joseph — sent home by his demented, textile-merchant father to fetch a left-behind wallet that may not even exist. After sunset, the “fantastic anatomy” of a child’s sketches supplant known architecture: “There open up, deep inside a city, reflected streets, streets which are doubles, make-believe streets. One’s imagination, bewitched and misled, creates illusory maps of the apparently familiar districts, maps in which the streets have their proper places and usual names but are provided with new and fictitious configurations by the inexhaustible inventiveness of the night.”

It is Schulz who is inexhaustibly inventive. His phantasmagorical account of life in a turn-of-the-20th century Polish city in the presence of a long-suffering mother, a strict housekeeper, and vivid but lunatic father, is lacquered manna that drips like from an “inaccessible sphere,” each dollop supplying descriptive nectar to the exotic birds his father adores. Schulz, also a gifted illustrator, is incapable of plainness. The “limitless possibilities of being” dress the mundane in ravings: Chandeliers are “old thistles”; cockroaches “moving whispers”; fabric-clad shop clerks are “living bolts of cloth like mummies; Nimrod the dog eccentrically awaits the “sensational” event of meals. The seasons are haunted. Daily life is a “beautiful stain” always hungry for more of its odd and wondrous self.

This is not surrealism but “canicular semi-reality” instead, the zealous coiffing of adolescent secrets from dog-day boredom, gales seen as “black, moving amphitheaters” that give solace to the wind’s “cosmic homelessness” and pubescent stirrings that yield ladies who swallow breezes in gulps “as if they were ice cream,” pornography leaking from their indolence.

Schulz, shot dead on a Gestapo whim in 1942, didn’t have time to make his whole mark, which would no doubt would brought dreamers to tears. His Teutonic mind’s eye is wildly closer to Bosch than Borges: Read closely and all the world’s a bug or a storm, luminous or dark but always eagerly in motion, Schulz shoveling poetry into the iris of cripples and misfits, progeny of the “human hive.”