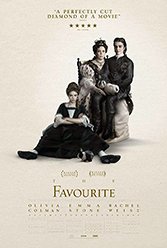 The trailer markets “The Favourite” as British court farce, with clips of lavishly dressed scene-eaters. Ever-challenging director Yorgos Lanthimos, however, turns the genre on its head, no doubt disappointing those who thought they would see a period “Fawlty Towers.” The straightforward plot pits a trusted but manipulative counselor to a monarch against a younger and even more manipulative upstart.

Lanthimos upends the period drama by giving all the major roles to women. The men are irrelevant stereotypes; the political, emotional and even sexual dramas are all among the women. Olivia Colman has been nominated for a Best Actress Oscar as the neurotic and needy Queen. Rachel Weisz (“My Cousin Rachel”) as her ensconced counselor with her own political agenda and Emma Stone as the cruel and narcissistic –“I’m in this for me”—challenger (a far cry from her “La La Land” role), have both been nominated for Best Supporting Actress. If there were an Oscar for Best Ensemble, these three women would be “favourites.”

Unlike in typical British farce, Lanthimos plumbs the emotional and psychological depths of his three main characters, offering indelible portraits: the female monarch makes her bedroom a warren for a herd of rabbits who stand in for the 13 babies she lost; the political conniver aims to keep Britain at war with France, playing politics à la Margaret Thatcher; and the schemer, who is pushed from a carriage into the mud, marking her fall from royalty and grace, returns with a vengeance.

Lanthimos sometimes has an obscenely grotesque, over-the-top sensibility (“Killing of a Sacred Deer,” 2017). Here he harnesses his peculiar talents to produce a more accessible —yet at the same time unique —result.