The favor of their voices 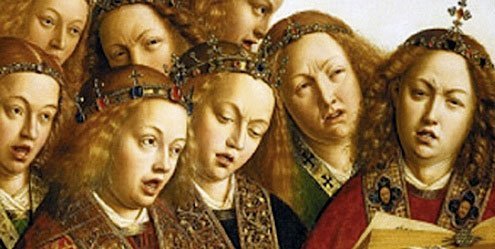 ur middle school is preparing a program of traditional Christmas songs. This will be my last performance with these children because, unknown to them, I will soon be leaving the school. I’ve taught most of them since they were three years old. They are the most talented and enthusiastic students I’ve had, in 25 years of teaching.

This year, however, they’ve turned sour. They’ve become teenagers. The other day, Aubrey said to me, “You always wear that tan sweater and those earrings. Don’t worry about it though. Stai bene lo stesso.” Now she tugs her tight T-shirt, pouts her glossed lips and tosses her hair. She yawns, “I’m not singing this year.”

I push the pipe organ button on the electric piano and turn up the volume. I notice some smiles, looks of admiration for the organ. Teens respect noise.

They complain about having to learn 18 pages of words.

“You don’t have to learn all the words,” I say. “Most verses will be solos.”

They respond, “No way. Not me solo.” I don’t recognize them. They used to plead for the privilege of singing a solo.

Adelaide, a new Portuguese girl with a beautiful voice doesn’t know that singing has become uncool. We listen spellbound to her “Venite Fedele.” When she finishes everyone claps but no one else wants to try singing.

There’s a knock on the door. It’s the Spanish teacher to help with the Spanish songs. She stops us after two words to correct the pronunciation. We try again, still not right. We go to the third word. “No, no, no.” She sings two lines of “Campana Sobre Campana” all on one growly note. The kids laugh. They don’t sing.

Some children have been fussing with their brass instruments, stroking them, holding them to the light to be admired. I make them put their instruments off to the side but their eyes roam there longingly. This is the first year our school has offered lessons on brass instruments. Some have had their instruments for only a few weeks. Lucas raises his hand to say, “Nancy, You know yesterday when I blew, the whole tube filled up with spit.”

“Hey,” I say, “just like a pro.” He smiles and checks to see if the others heard.

The song begins, “Play the trumpet and bang the drum.” I leave out the drums because I don’t want to cover these puny, half-hearted voices. Shu, playing chimes, is not on the beat Ale offers to play along but now they’re both off beat. It doesn’t matter. Once the brass start to play, no one can hear them.

The trombones enter with long, farty blasts. We non-brass people laugh. The first trumpets play beautiful clear notes that make the windows rattle. The second trumpets create a foghorn effect. I shout to the choir, “Louder! I can’t hear you!” They mumble sullenly. What the heck! We might as well add the drums.

“You seem to think you can sing with your mouths shut,” I say to them. I feel like a mother trying to spoon feed a baby who spits it all out on his shirt.

The truth is this: There is no way I can force them to sing. They understand this with a giddy sense of adolescent power.

“Singing is good for you,” I plead. “Your voices express who you are. When I first fell in love with my husband, it was for his voice.” (At this, the girls perk up.) “When you sing together and listen to each other and make your voices meld, it’s a kind of communion. And when the audience is concentrating and listening with you, something happens. It’s magic.” I’m blubbering and ranting like an impotent, sentimental fuddy-duddy. Eyeballs roll. There’s giggling in the back. I contemplate retirement.

The night of the performance, I warn the other teachers, “It won’t be as good this year. I couldn’t get them to sing.”

But they do sing. The opening of “Joy To The World” is shockingly loud. Their voices fill the auditorium like the Tabernacle Choir. They sing with power, pathos, joy. The solos are professional. Aubrey sings as though she’s been living only for this.

During the final applause, students start to chant my name. They look at me, smiling. I understand that they sang for their families and because they love to sing, but they also sang as a favor to me, out of friendship. I accept with gratitude.