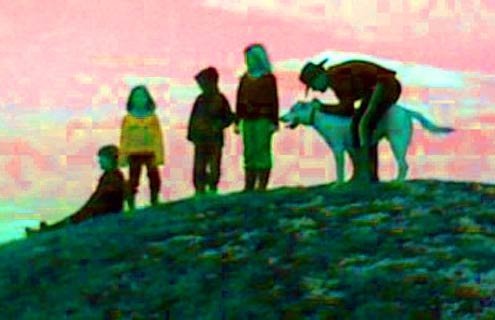 A family in the hills gets lots of advice.
W

e live in a very small northeastern Italian town that tourism gives a veneer of sophistication during the summer months. Underneath, it’s essentially a deeply rural community populated by small farmers. The pace of life is slow and dictated by the seasons. It could easily be described as a Hicksville.

A British family with fair children moving into such an area was bound to produce a response from the old-timers; the ones camped out in the sun outside the bank always ready to furnish us with running commentary as if we were hard of hearing.

“You see that woman,” said one. “She’s got five children, it’s too many to be sensible.”

And another: “Do you know where they live? What’s she going to do in winter? It’s ridiculous.”

And more still: “There’s only 30 olive trees down there they need more.”

And finally: “You see that fella? He’s got his pigs out, they’ll be up to their knees in mud come the rain.”

All this was said in smiley and friendly way. Though I found it a bit insulting at first, I got used to it over time, mostly because a lot of what they said proved right. The winters are hard and the pigs are pretty muddy (though they seem to like it).

But the comments did highlight a big difference in animal husbandry techniques.

While we’re used to seeing cows grazing in the fields and pigs happily wallowing in mud, Italian farmers tend to keep these animals inside without any access to pasture. Sheep are the only exception. They’re kept almost exclusively for their milk so they need to graze constantly to produce enough to make the local Pecorino Fresca.

There are two flocks of sheep in our valley. A genial Sardinian named Sebastiano, a great cheese-maker, keeps a small herd, while Nardino, a man from Lazio who also runs a restaurant, owns a larger commercial flock.

When Sebastiano grazes his sheep on our land he gives us a lamb, but when Nardino comes round we’re lucky to get a bowl of ricotta.

We’re grateful Nardino doesn’t offer us cheese, because frankly, it’s not very good. I mentioned this to a neighbor, who just shrugged and said, “Of course, how can he make good cheese, he’s a right idiot that one.” Idiot was not the word she used.

You may have heard that Italians put considerable passion into their food, but now you know personality and taste are also somehow related.

In all milk flocks, male animals are a surplus to requirements. As long as they’re slaughtered before their upkeep becomes a burden, they’re a useful source of cash — which explains why lamb is such a popular food choice for Easter Sunday.

When it came time pick up our lamb from Sebastiano I happily went along to his barn in hopes of seeing the meat for our tasty roast. I was a little dismayed to find the little chap still alive.

Sebastiano greeted me cheerfully and said it wouldn’t be long. He got hold of the lamb, swiftly severed its main artery, and gently laid it down on a slope so that it bled out. Without a bleat of evidence distress or further violence, the life quickly left its body.

Coming from a city where my meat generally comes neatly wrapped, the incident was sharp reminder of the reality of farming. It may be Hicksville, and perhaps a little bit dull sometimes, but there’s an awful lot to learn for those who watch the careful rites and rituals, and choose to get involved.