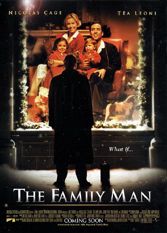 Brett Ratner begs the question how a European or Asian director might have handled the material at hand: namely, the mixed blessings of conspicuous consumption. Nicholas Cage is affluent businessman Jack Campbell. He has the predictable “everything,” girls, cars, money… and yet. Cometh one Christmas Eve (when else?) and Campbell meets a wise cab driver who (typically for the saccharine-supernatural genre) is also one-man transporter chamber. Suddenly, Jack is unloaded into life as it might have been, suburban and married with two children. His wife is college girlfriend Kate (Téa Leoni). He also has hygienically-challenged dog. He’s not a wealthy businessman — oh no — but the blue collar son of a tire salesman. Take that, Mr. Dream.

The bewildered retroed-Cage is sweet, ditto for Leoni. Cab-driver go-between (Don Cheadle) is also a kind soul. Only the kids interject a little doubt about the realness of disoriented dear-old-dad. Why is it that American mainstream scripts wear down good actors by dwelling immovably on sitcom themes, as if eccentrics couldn’t father children or billionaires wouldn’t know to nuzzle a dog? Don’t answer. It’s not the Christmas tear-jerking that disappoints — Ratner milks it graciously enough — but the tediousness of the premise.