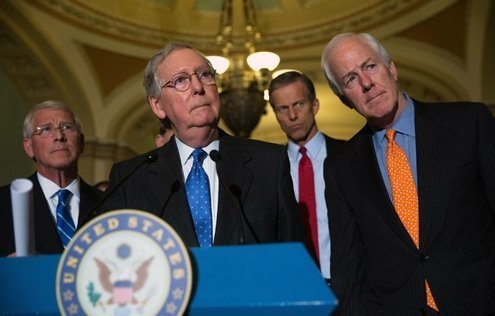 Majority Leader Mitch McConnell, foreground, has said Republicans will refuse to meet a Supreme Court nominee even as a courtesy gesture.
Y

“Shooting from the hip” means to react quickly without considering possible effects. Senate Majority Leader Mitch McConnell did just that immediately after the death of Supreme Court Justice Antonin Scalia when he flatly said, “the vacancy should not be filled until we have a new president.”

The veiled warning to President Barack Obama that he’d better refrain from nominating a replacement for Scalia was intended to stake out the conservative position. But in doing so McConnell also fired a wayward shot across the bow of the U.S. Constitution, declaring his intention to take it and the country’s political process hostage. You need a good plan when you do something like that.

One good plan would have been to use the occasion to propose term limits for Supreme Court justices. Scalia had been on the court for close to 30 years.

Several years ago in this space I argued in favor of term limits for the nine justices, recalling Scalia’s comment that “he would rather not retire while President Obama was in office.” Ever the jovial optimist, Scalia did not allow for the intervention of a more powerful “judge” in his calculations.

But Scalia’s comment was a demonstration of just how blatantly political the Supreme Court had become; and McConnell’s knee jerk proclamation, while Scalia’s body was still warm, only served to fortify that reality and further drive home the argument for term limits.

With the current eight-justice Supreme Court makeup, there’s is a very real possibility of a 4-4 split on ideological grounds in further cases set to be decided this term, which runs into summer. Though the Judiciary Act of 1869 foresees a nine-justice court, McConnell and his Republican Party have long had other priorities. As McConnell, a Kentucky senator, stated on the eve of the 2010 mid-term congressional elections, his primary concern was “making sure Obama’s a one term president.” McConnell seeks only what’s best for his party, not the country, at any cost.

Though Obama foiled McConnell’s goal by winning a second term, the Republican strategy has largely worked. An uncooperative Congress has thwarted Obama time and again. The result has weakened the presidency, made Democrats look bad and put the government into a political no fly zone. After McConnell’s opening salvo came an even more remarkable statement by the collective Republican leadership: it would refuse to even meet with an Obama nominee even as a courtesy. “In short, there will not be action taken,” said McConnell.

But what if another justice “retires” unexpectedly during Obama’s final year? If it were another conservative justice, Obama could play out McConnell’s clock with a liberal leaning court for the rest of the year, and the majority leader would have squandered an opportunity to have a new justice with a moderate profile appointed while the Republicans command a majority in both houses of Congress.

Delays in appointing judges to the highest court are not confined to the U.S. In December 2015 Italy filled three judicial seats in its 15 member Corte Costituzionale, which had not been deliberating with all of its justices since June 2014. But the Italian delay was the result of political fighting over other matters, not because the process had come to a halt — the situation that now looms in the U.S.

Interestingly, Italian judicial court appointments are limited to nine years, a term that allows and even encourages selection of experience and wisdom over youth.

All hypothetical possibilities aside, the true fallacy in McConnell’s approach is how it posits that all Americans are gullible all of the time. Strikingly, he said the American people should choose the next justice even though Article II of the Constitution specifically reserves that role for the president (who “shall have power, by and with the advice and consent of the Senate, to … appoint … judges of the Supreme Court.”)

McConnell would have us all believe a nominee should wait until sometime in the spring of 2017, after the result of the 2016 presidential race. In a nation divided, it’s a stunning position to take.

There are laws against kidnapping for good reason. No one wishes to be held against their will. Yet McConnell and his Republican peers appear intent on persisting in a shameless effort to usurp presidential power and hold the Supreme Court hostage. The electorate’s judgment on that will come in November.