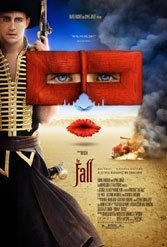 In this beautifully imagined and critically reviled ode to fractured fantasies and disconnected dreams, a bedridden and brokenhearted stunt man, Roy (Lee Pace), befriends a young orange-picking girl, Alexandra (nine-year-old Catinca Untaru) in a Los Angeles hospital of the early 1920s. She’s the hospital mascot, an broken-armed immigrant rascal of few words. He’s a whisperer of fully-fleshed Arabian Nights-like tales, most morpheme-fueled and conjured from the characters of the hospital day-to-day to bribe Alexandra into supplying his narcotics.

Tarsem Singh’s evident labor-of-love — an ode to stunts both physical and mental — is so ambitious that it can only fail, since there’s no absolute measure of success in portraying a transcendental tie between a depressed man and an impressionable little girl, each besotted by a yearning for pretend worlds, for the tectonic redrawing of past and present, for love, for happy endings. No yardstick exists to measure this kind of make-believe conspiracy that juxtaposes Indian temples with Art Deco without digital effects (Singh filmed in 18 countries, including India, South Africa, China, Romania, Bali, and Cambodia).

At times clunky, silly, comic, touching, disconcerting, pretentious (sometimes all of these at once), Singh’s film nonetheless represents a wildly vaingloriously but sincere attempt to put sentimentalism and surrealism under the same bell jar.

Alexandra’s gorgeous “control” of naturally accented language — her speech is approximate, tentative — establishes a narrative that is at home outside speech. Rare is the invention the chooses such a path less traveled. Even rarer is a love story about the adoration of story-telling, and within that tribute to the audaciousness of stunts.