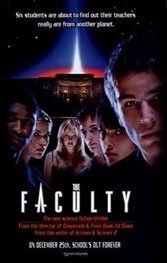 Herrington High nerd Casey (Woods, pre-Hobbit) discovers a strange new life form lodged all too close to the football coach (Patrick) and takes it to his biology teacher (Jon Stewart, before his Comedy Central/”The Daily Show” days). Enter aliens. All this naturally overlaps with insider cattiness, boyish rivalries, new arrivals, and who’s dating whom. In the time it takes to say creature feature, the wacky horror is full on, with the kids up against the body-snatched while trying to decide if they have a water-bug among their own. There’s nothing that’s not predictable here but the whole is never less than charming (puns, the Herring in Herrington, intended). Moral of the story: beware your football team, and with it girls with long tongues that get naked in swimming pools, particularly if they just transferred over.