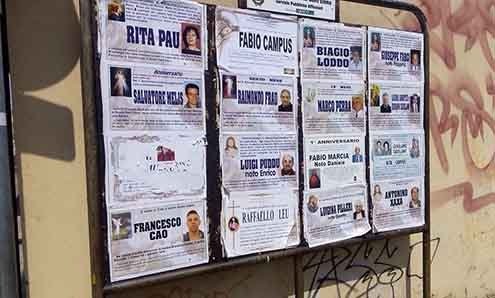 Rural Italian towns still depend on "necrologie," or death notices.
I

stand several paces outside my northern town’s post office gazing at the funeral notices, or necrology, plastered onto a tall metal stand that has permanently marked its territory on the fringe of the piazza. Some invented, but representative, examples:

Valter Bongiovanni, 101, aka the partisan ‘Lupo.'”

Then, more sobering: “the family announces the sudden loss of Enrico Fantozzi, 34, loving husband of Marta, brother of Franco.”

This is no occasional distraction, reading the names, calculating the ages of those left behind, speculating on the illness that prevailed, identifying the face from an earlier photo as someone seen at the mercato on Wednesday mornings or among the old guard piazza chatterboxes. Not for me or for most folk in town.

Whether out of detached curiosity or for the sake of keeping on top of all things local, this is the only way we have of keeping track of deaths unless the departed was more intimate.

In my parallel world across the ocean, announcing a loss is the duty of the local newspaper, now featuring an online edition with access to obituaries of last week or the last decade. They are celebratory in nature, these tributes, crafted essays with ample listing of degrees earned, careers embarked on, hobbies indulged in, charities given to and clubs joined. Credentials that heaven will appreciate in order to better sort the new entries.

But in town, under the stark sunlight as the noon bells toll, the tables of the abutting outdoor restaurant awaiting patrons, the orange ochre baroque church looming over my shoulder in a “we’ve-got-this-covered” pose, a sense of unease infiltrates.

Indeed, after the split-second framing of the subject, the facts, presumed or fabricated, give way to a chilling memento mori moment. I take an imperceptible breath.

Coming to terms with your eventual demise in this way is strangely and subtly more confrontational than pouring over flattering obits. No exaltation of character, no pretty words masking averageness, just the minimum to compose the briefest narrative, along with a photo, the age (flinchingly prominent), the date of passing, and the service arrangements — in church with a funeral procession to follow, directly at the hospital morgue, or on-site at the cemetery (the rite for an old communist, perhaps), a burial or a cremation, the latter more common now but an anathema in a more recent era.

Taking in small doses of the deceased in a public space drives home the point more incisively than wandering through a cemetery, where entombment on a mass scale generalizes the concept or can even fictionalize it. Besides, graves may give aesthetic enjoyment; the markers can frame an historical moment or trends in cemetery stonework, potentially distracting from the memento mori effect. But the Italian necrologo, slapped up on a public board like a World War I call to arms or invitation to the circus, is psychologically wedged between just yesterday and eternal rest, a sort of transitional space and time that allows for a different kind of reckoning that reminds you that the moment really is here and now.

My post office sessions are also confirmation of the dogged longevity of Italians, though I’m not in Sardinia, focus of research into the benefits of the Mediterranean diet. Instead, I’m in a town on the plains outside Bologna just down from the Lamborghini plant where eating pork-filled tortellini in hot capon broth in the August torridness is a ritual for a certain generation.

Life expectancy data stare me in the face with every consultation. I contemplate the statistically theorized age of my own eventual appointment and am thankful for the longish reprieve. Then I brace, having spotted another’s departure that has come within five years of my own age. My eyes lower in obedience to yet another reminder of mortality.

A pair of crooked old men in flat caps approaches the metal stand with a body language that denotes the habitual check. A shared acquaintance, Dino, has made his appearance on the board. “Well, what do you know? One by one, we’ll be joining him soon,” one says. They half chuckle, shaking their heads with a philosophy I don’t quite have access to yet. They then split ways with an almost happy gait, directed home for what I imagine to be another carotid-challenging lunch.

I also head home after my piazza errands, passing two other demographic indicators: a big blue bow splashed on a door under the arches announcing the arrival of a maschietto, a boy, and a daintier one in pink tulle a few blocks on letting the world know that a femminuccia is now to be counted among our inhabitants.

About the Author: Amy Stover