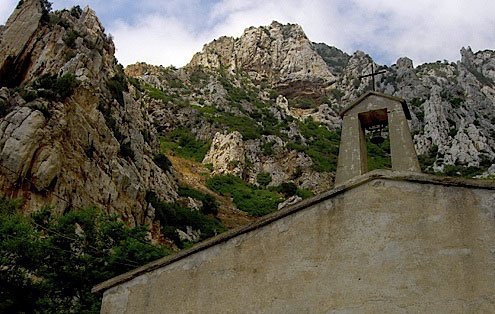 I followed the dirt road past the mountain range and back to my apartment. Photo by Eliot Stein.
T

he Piras family had lived on the same plot of land for the last 500 years. He was a beekeeper and she, fittingly, loved flowers. They had never met an American before and probably never expected that their daughter, Nathascia, would ever date one. An invitation to their farmhouse had led me to skirt a mountain range, follow a dirt road, and wait nervously on their stoop. Already late, I knocked hesitantly, buttoning my collar to conceal the lump in my throat. Signora Piras unbolted the door.

“Welcome to Uta,” she said, wiping her hand on an apron before extending it to me.

You can view Uta in its entirety by climbing any of its trees. A pleasant, earthy mixture of manure and mud suffuses the air, reminding you that agriculture is never far off. It’s the kind of place that encourages hobbies, and where families like Nathascia’s still work the earth they grew up on.

Hearing his wife’s voice, Signor Piras lumbered down the stairs as if he’d been waiting. He was a brawny man with a square frame that seemed to expand when he smiled. Instinctively, my hand shot out towards his. He seemed to consider its delicacy before swallowing it in a calloused grip.

“Nathascia will be down soon,” he said.

The Piras parents’ unwavering commitment to tradition is displayed proudly in their living room. I made small-talk with Nathascia’s mother while a painted audience of Sardinian women in conservative headdresses eyed me from the walls. I did my best to avoid their gaze, but they seemed to examine me like a jury. Did they know something that Signora Piras didn’t? That Nathascia’s “sleepovers at Stephanie’s place” did not involve Stephanie? Or that her trip to Rome with “Eliot and a bunch of friends” was only partly true — the “friends” being strangers we recruited for our photos at the Coliseum to help corroborate a white lie? Just then Nathascia appeared at the bottom of the stairs and Signor Piras interrupted my guilty conscience.

“Well I hope you’re hungry,” he said. “My wife likes to feed those who like to eat.” It was a get out of jail free card for someone who’s never counted calories.

Nathascia and I sat at opposite ends of the table. Signora Piras offered me homemade malloreddus, panadas, and sebadas — made from the cheese and honey produced by the sheep and bees kept on the farm — and furnished a detailed explanation of each dish’s preparation as each new food was placed before me.

“Have you ever killed a lamb?” asked Signor Piras.

“You should know how to kill what you eat,” he said as he led into a graphic description of how one person steadies the sheep’s legs while another slices its throat.

“It’s difficult to do alone,” he added. “I’ll show you sometime,” an omen that came true a month later in the driveway.

The Piras’ capped-off the meal with a seven-flavor honey tasting from their business, “The Three Bees.” Though deathly allergic to bees, Nathascia is a product of honey. What began as a modest venture by her grandfather has slowly evolved into the family’s livelihood. By supplying retailers throughout Cagliari and exporting to clients as far away as Germany, the Piras’ have saved enough money to add an addition to their house and send Nathascia to a private English school. Were it not for honey, we would have never met one rainy night when she rolled down her window to offer an umbrella-less teacher a ride.

Signor Piras explained that the fields surrounding the farmhouse are divided by flower-types, as a honey’s flavor varies according to the genus of flower the bees pollinate. He places the bees in the middle of each field to ensure that they pollinate the desired flower. The number of bees he places in the field correlates to the demand for that flavor. After collecting the honey from the comb, it’s prepared for shipment at the company’s stockroom — a grey building separating the homes of the agency’s two sole employees, Signor Piras and his brother.

After digesting a four-course meal with mirto, a liqueur made from the myrtle bush, Signora Piras offered me a jar of my favorite flavor from “The Three Bees” to take home. Did this mean they approved of me? Ecstatic, I tried to play it cool with an open-armed thank you for a wonderful evening.

The door seemed a little narrower on the way out. I followed the dirt road past the mountain range and back to my apartment.

The next day I called Nathascia.

“Relax, they like you fine,” she said. “Just so long as they think you’re my English tutor.”