The English on the hill 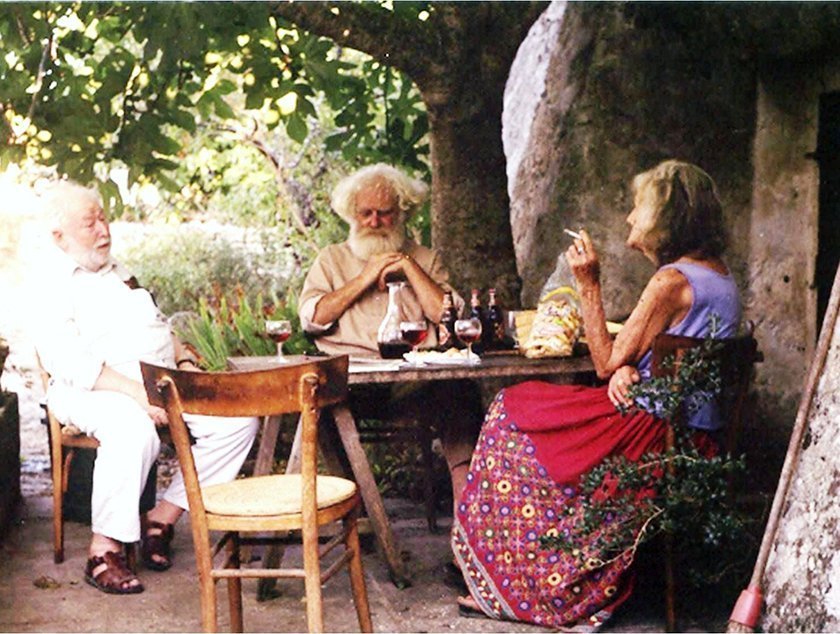 hirty years ago, on March 8, 1991, the eminent English food writer Patience Gray published “South to the Salento,”for a “New York Times” supplement known as “The Sophisticated Traveler.” The article was filled with stimulating tips for those interested in taking a short tour of Salento, covering such not-to-be-missed places such as Lecce, Gallipoli, Otranto, and an assortment of country villages.

At the time Gray and her Flemish-born sculptor husband Norman Mommens had been living locally in an 18th century “masseria” (a sheep farmstead) for more than two decades. I had met them at a dinner held by mutual friends in the late summer of 1989.“Come to tea next Saturday,” Patience told me as I was taking leave.

On Saturday, I pulled up in front of the Masseria Spigolizzi at five sharp, disembarking with a tray of cakes, just bought at the locally cherished Martinucci patisserie.

Patience and Norman were sitting on the stone “sofa” built against the front wall of the house, shucking chick peas. I sat down and started to help them. When we moved to the back garden and sat at a table under a gigantic fig tree, Patience brought out a wooden tray with three glasses, a decanter of red wine, a bag of taralli al finocchio (salty ring-shaped biscuits with fennel seeds and pepper), several helpings of pecorino (ewe’s milk cheese) and an inviting salami.

So it was “high tea” after all, though the rustic Salentine version. We talked long into early evening and just when I was leaving, Patience said: “Why don’t you stay for dinner, so we can taste those delicious cakes together. Norman can’t wait.” It was the first of my innumerable Saturday nights at Spigolizzi.

To get to Salento the two artists had taken the longest way, following a vein of marble to quench“the sculptor’s hunger for stone.” They had met in London in 1958.

Patience and Norman were sitting on the stone “sofa” built against the front wall of the house, shucking chick peas.

Patience Gray was working at “The Observer” newspaper as columnist for their newly created “Woman’s page.” Two years earlier, in 1957, she had published her groundbreaking cookbook “Plats du Jour.”

Norman Mommens’s main interest was already in sculpture, after a spell in pottery. Among other things, he had carved an imposing marble “Goliath” for Leonard Woolf, the author Virginia Woolf’s husband. In 1962 Patience resigned her position at the newspaper and she and Norman left England, bound for marble heaven Carrara, settling in Castelpoggio.

Patience wrote freelance articles and drew textiles for the Edinburgh Weavers. Around that time, she started to collect traditional recipes from local housewives and innkeepers, a tradition she would maintain wherever the couple traveled and lived, including Catalonia and on the Greek island of Naxos.

The last leg of their pilgrimage brought them to Salento, where they bought the decrepit masseria. They then restored it in Spartan fashion and settled down, with no mains water nor electricity. Water came from a cistern, drawn by a motor pump. Candles and Aladdin lamps provided feeble illumination at night. Several years later came a couple of solar panels, to produce enough electricity for three energy saving light bulbs, one in Patience’s studio, one in Norman’s, and one in the cellar. A fireplace in the kitchen, so large you could sit inside it, helped fend off the winter cold and drain humidity from walls and bones when the sirocco wind blew across the Ionian Sea.

At Spigolizzi time was marked by the labors dictated by the alternating of the seasons: plowing, seeding, the olive harvest, and the great celebration of the grape harvest. 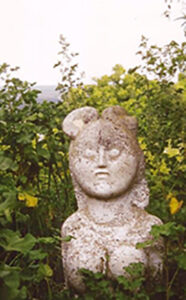 Spigolizzi, detail of the garden.

I would drive there every year to help make the new wine, together with several other friends from the nearby villages, and we would work long into the evening, in the candle-lit “palmento,” the room with the tank for the treading and the fermentation of must.

Patience would prepare a sumptuous dinner that we would all share in the garden under the stars. A local peasant, by the “appropriate name of Salvatore” (savior), taught the sculptor and his writer wife to cultivate the field in front of their house.When they were not working the land, one could hear the chisel resonating under Norman’s hammer, with the machine-gun ticking of Patience’s Olivetti 22 as a counterpoint. More often than not, these were the only sounds around, apart from the chirping of birds or the shrilling of cicadas.

Over the years, Norman exhibited his carvings in Carrara, Venice, Cambridge, Matera, and in Salentine towns. His works are in many private collections in Italy and abroad. Several of them are still at Spigolizzi, now inhabited by Nicolas Gray, Patience’s son, and his wife Maggie Armstrong.

Patience, an expert botanist, had developed a rare ability to forage for wild edible herbs and mushrooms since the years of rationing in England during the World War II. All this and the recipes she had gathered would come together in her masterpiece, “Honey from a Weed, Fasting and Feasting in Tuscany, Catalonia, the Cyclades and Apulia,” published in 1986. Ed Behr, editor of “The Art of Eating,”called it “the best book about food that will ever be written.” The volume, which has never been out of print, is also a depiction of an already vanishing rural civilization in the places visited by the author, particularly in Salento,which now struggles to hold on to ancestral traditions. Gray also wrote a novel,”Ringdoves and Snakes” (1989) and a collection of short essays, “Work Adventures Childhood Dreams” (1999). Her “The Centaur’s Kitchen” was published posthumously, illustrated by her daughter Miranda Armour-Brown, and edited by Tom Jaine.

When they were not working the land, one could hear the chisel resonating under Norman’s hammer.

Both Norman and Patience became passionate guardians of the natural environment and the historical relics of the land they lived on. Norman produced a cartoon, whose protagonist was a Salentine lizard, “Coppula Tisa” (one who keeps the peak of his beret flipped up, as local peasants would), to stimulate awareness on the environmental woes caused in the area by the greed of the few and the insensitivity of the many.

In time, Spigolizzi became a point of reference and meeting place for young people sharing these interests and values. Visitors and journalists would often knock at the door. The BBC’s Derek Cooper came twice, to interview both Norman (1983) and Patience (1988) for his food program on Radio 4.

The biography of Patience Gray (and lifelong companion Norman Mommens), “Fasting and Feasting, the Life of Visionary Food Writer Patience Gray,” written by Adam Federman, was published in 2017.

The article that Patience wrote long ago for the “New York Times” was recently unearthed and I translated it for Italy’s Edizioni Kurumuni. It was published in 2020 in the form of a nice bilingual (English-Italian) book titled, “A Sud, Nel Salento.”

Reading the piece today one cannot help being shocked by the changes. Salento keeps attracting throngs of visitors every year, most enthralled by the beauty of the land, the crystal-clear sea and the art treasures at every corner of its old towns.

But the small shops and artisan workshops, once scattered everywhere, which had once so delighted Patience, have long disappeared. The luxuriant olive groves have been mostly reduced to dark gray skeletons by the xilellafastidiosabacteria (they are now replanting them, thank God). Increasingly, wilderness areas are being bought out and developed.

A sparing way of life, rooted in centuries, has given way to unbridled consumerism. Norman and Patience regarded these changes with sad but detached eyes. But they never regretted their decision to settle in Salento, which they loved from the bottom of their hearts as their adopted homeland. Norman died on Feb. 8, 2000. Patience followed him on March 10, 2005. Their resting place is in the cemetery of the town of Salve, not far from the restored Salento farmstead which, after all their travels, they had come to call home.