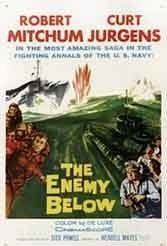 For two decades beginning in 1940, submarine warfare was the gold standard for macho chess games in film. Put a Brit or an American on one side and a Nazi or a Japanese on the other and you had a movie — too often a bad one. “The Enemy Below” is among the great and enduring exceptions.

Robert Mitchum is Captain Murrell, a deeply weathered, stone-faced commander exiled to run a destroyer in the South Atlantic after enduring all manner of strategic and personal losses in the hell-house north (his wife died in a U-Boat sinking). Asked if it’s too hot for him, he cuts to the quick: “It’s always either too cold or too hot, wherever there’s a war on.” Below him is Curt Jürgens’ Captain Von Stolberg, a pointedly disenchanted Nazi U-Boat maestro who loves tactics but finds everything about Nazi ideology tedious, and Hitler’s self-importance comical, pining for a time when warriors were more noble (“There is no honor in this war. The memories will be ugly, even if we win. And if we die… we die without God…”) He is of course the anti-Nazi, a hackneyed recipe that all too often failed. Not here. When Murrell’s destroyer picks of traces of Von Stolberg’s sub, the camera alternates deftly between the two men as they advance a tense and well-drawn morality play based on the simple concept of respectful adversaries.

Murrell’s attacks are met by Von Stolberg’s countermoves. The American’s ruefulness is offset by the German’s gruffly alert optimism — Jürgens, Mitchum and the supporting cast is superbly tuned in. Obviously there’s a winner and a loser here, at least in terms of the destroyer-sub face-off. But in human terms, the ones that clearly matter most to director Dick Powell, the 90-minutes play out as a moving standoff between two upright and dignified adveraries. Based on a novel by D.A. Rayner.